We saw marijuana stocks jump late in the week last week. Both The Cannabis ETF (THCX Report) and ETFMG Alternative Harvest ETF (MJ Report) started the week lower but finished strong before the end of the week. THCX rose from an open of $12.78 on Monday and by Friday had reached highs of $13.59. 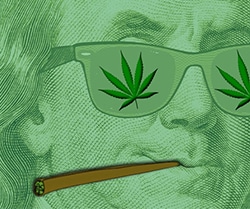 Similarly, Alternative Harvest rose from $16.83 on Monday to highs of $17.91 early Friday morning. Something to note was the THCX finished its Friday session flat while MJ seemed to have faded by the close.

Last week we got word that the province of Ontario, Canada will see its retail market open for business soon. The Canadian province plans to issue around 20 new store approvals starting next April. Furthermore, as CBC News reported, “Individual companies will be allowed to own up to 75 retail stores by September 2021.”

High Hopes For The Future For Marijuana Stocks

Right up until recently, would be retailers needed to have a letter of credit of at least $50,000 and pay a $6,000 application fee (non-refundable of course). Submission of this was required within 5 days of being picked in a lottery. For those companies interested in the Ontario market, applications should be submitted to the Alcohol and Gaming Commission of Ontario by January 6, 2020.

[Read More] How To Invest In Marijuana Stocks; Top Brokers For Cannabis

“In response to the federal government’s decision to legalize cannabis, our government is determined to open the cannabis market as responsibly as possible,” said Attorney General Doug Downey in a news release. “We have said all along that opening more legal stores is the most effective way to combat the illicit market, protect our kids and keep our communities safe.”

Thanks to these new updates, cannabis stocks saw one of the more positive weeks last week:

These are just a few of the marijuana stocks that quietly rallied last week. It’s no secret that 2019 was a rough year for pot stocks. But recently it seems like the dust may have settled for now. Last week, the top names in cannabis flooded Las Vegas at MJBizCon 2019. One of the biggest topics from the convention focused on uniformity. This came in the wake of the recent crisis brought about by black market vape products as well as some companies attempting to pass cannabis supply as high-grade.

Marijuana Stocks Now And In 2020

In a Q&A with Chris Day, VP of External Relations for MJBizDaily, he told MarijuanaStocks.com several topics to keep in mind during this latest evolution of the cannabis industry.

First, he explained that “Each year we produce MJBizCon, it is important for us to highlight the advancements the industry has made. This year, we are launching the Investor Intelligence Conference and the MJBizDaily Awards.”

“For the first time, we will also surpass 35,000 attendees from more than 70 countries. The rapid growth of the conference reflects the global expansion of a new industry. We are fortunate to be the world’s largest gathering point for professionals focused on building the legal cannabis industry.”

This sentiment remains a keystone to sparking more interest in 2020. Day explained that “It’s clear if you look at market data and consumer behavior in medicinal and adult-use markets that the industry has only begun to develop here in the United States and the globe. Our annual Marijuana Business Industry Factbook recently projected the enormous YOY growth rates for the next five years. I have no reason to believe those types of curves won’t continue to be seen far into the future.”

With things like the SAFE Banking Act passing and the pending MORE Act in the throngs of Washington, the future for cannabis could look bright leading into 2020. As we’ve seen plenty of times in the past, the sector is cyclical in nature and the end of the year is an interesting time to look for marijuana stocks to buy. We discussed earlier this month as to how events like MJBizCon open the eyes of investors looking to get in on the next cannabis boom.

Next year also poses more opportunities for growth. Roughly 18 states have some type of legislation on the table or in the process that could legalize medical and/or recreational markets next year:

One of the biggest things to keep in mind is that we’re approaching a Presidential election year. Why’s that important? These years are the ones we historically see more young voter turnout than others. Since cannabis is a big topic of discussion for younger generations, we could see building interest over the next few months as far as legalization talks are concerned.

Every day the marijuana industry is growing and maturing. The five-year-old…