Over 20 Governors Want To See The Passing Of Cannabis Banking In The U.S.
Total
14
Shares
Share 14
Tweet 0
Pin it 0

A bipartisan alliance of over 20 governors are pushing for the heads of Congress to pass cannabis banking. This cannabis banking measure is a part of an important defense bill. At the beginning of the week, the House and Senate were sent a message. This letter was sent to the top legislators in both chambers. The state officials announced the SAFE Banking Act should be attached to the National Defense Authorization Act (NDAA).

The House has already passed its version and included the banking legislation. Yet it is questionable if the Senate will pass it as well. Colorado Gov. Jared Polis (D) led the letter, which is also signed by the governors of 22 other states and territories. In addition to having the support of Washington, D.C.’s mayor. It states that the SAFE Banking Act “will allow cannabis businesses to access normal banking services, which will transition fully cash-based cannabis transactions into the financial system where they belong.”

“Thirty-seven states, four U.S. territories, and the District of Columbia have passed some form of recreational or medical cannabis legalization measures,” the governors wrote. “Medical and recreational cannabis sales in the U.S. were estimated to total $17.5 billion last year, but because of antiquated federal banking regulations, almost all cannabis transactions are cash-based.”

Rep. Ed Perlmutter (D-CO) is the chief sponsor of the House standalone banking bill. The banking bill would defend financial institutions that work with legal cannabis businesses. This protection would stop these MRB’s from being penalized by federal regulators. The SAFE Banking Act has passed the House in one form or another. Which has been done five times now along largely bipartisan lines.

“Not only are cash-only businesses targets for crime, cannabis businesses are further disadvantaged compared to other legal businesses by being unable to open bank accounts or obtain loans at reasonable rates,” the letter states. “The cannabis industry is legal in some form in the majority of U.S. states and it is too large of a market to be prohibited from banking opportunities.”

“The SAFE Banking Amendment will remedy these harms and help keep communities in our states and territories safe by allowing legitimate and legal cannabis companies to access banking services. Financial institutions will subject the funds and account holders to rigorous anti-money laundering and ‘Know Your Customer’ requirements that will further help states where cannabis has been made legal to keep bad actors out of the system. The SAFE Banking Amendment will also harmonize federal and state law to ensure that depository institutions that provide banking services to legitimate cannabis-related businesses and ancillary businesses are not penalized.”

The Next Step For Federal Cannabis Reform Among Political Parties

However, the governors’ proposal for marijuana banking reform is important for several reasons.

To start it’s the most recent progress in a continuous battle in regards to policy priorities in Congress. To which some members mainly the Senate have insisted on passing comprehensive legalization first. A passing the Senate aims to achieve. Specifically before enacting something that’s observed as most favorable to the industry. Secondly, state officials are particularly asking that the measure be included in the NDAA. This measure is viewed as a conceivably more likely medium. Which is in comparison to getting the standalone SAFE Banking Act approved through the Senate. 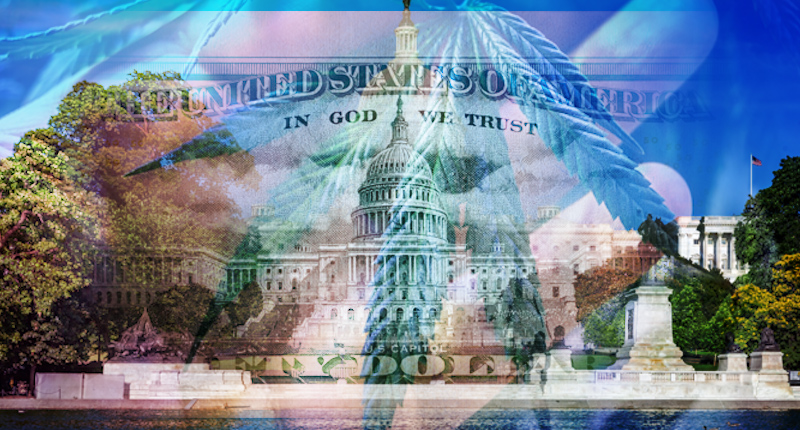 Senate Majority Leader Chuck Schumer is leading his own federal reform bill. Along with the support of top politicians. Schumer has voiced his stance and feels ending cannabis prohibition should happen before banking reform. This has left a window of opportunity to approve the more modest policy change through the NDAA. Yet only with adding some social equity components to the proposal.

The governor of Schumer’s state, Gov. Kathy Hochul (D), is among the signatories on the new letter.

“Simply put, this is a public safety issue that Congress has a responsibility to address. The SAFE Banking Act has now passed the U.S. House of Representatives five times but the Senate has never voted on the measure,” the governors wrote. “The SAFE Banking Act has more bipartisan support than ever before and Congress must take steps to ensure that this measure is included in the final version of the NDAA that goes to President Biden’s desk.”

Pushing For Federal Cannabis Reform In The United States

Still, however, there’s some discussion among legislators and advocates about whether banking should be advanced initially. Which would happen before Congress comprehensively ends prohibition and enacts policies that center social justice. Sen. Cory Booker is also working beside Schumer on the legalization bill that’s being finalized. Booker has made his intentions clear by trying to put up a fight if the Senate proceeds to pass the SAFE Banking Act first. Booker’s home state governor, Gov. Phil Murphy, as well inked the new letter calling for urgent action on cannabis banking.

“It’s time for Congress to allow cannabis-related businesses to have better access to the banking system and operate with normal bank accounts,” Polis, the Colorado governor, said in a press release. “After years of cannabis being legal in a multitude of states, it is long overdue for cannabis businesses to finally financially operate alongside other businesses in the open national banking system.”

Final Thoughts On Cannabis Banking Reform In The USA

A group of small marijuana business owners also recently made addressed valid points. They spoke on the fact that incremental banking policy change could truly help promote social equity efforts. Board member Rodney Hood, of the National Credit Union Administration, back in October wrote on a marijuana publication. He wrote that legalization is on the way and will ultimately be passed. He continued to say it makes the most sense for government agencies to get ahead of the policy change to resolve banking difficulties now.

At the same time, an official with the IRS said that the agency would like to “get paid,”. To which the IRS would help if the cannabis industry had access to banks. Just like companies in other legal businesses so they could more efficiently comply with tax laws. Federal data shows that many financial institutions remain hesitant to take on cannabis companies as clients. Nevertheless, this is likely caused by the fact that cannabis is still illegal under federal law.

High on marijuana stocks? You’d better do your homework before investing. A…

These Pot Stocks Saw The Most Upside From Last Weeks Trading