Unless you live under a rock, you know that marijuana legalization is taking the world by storm.  BDS Analytics estimates that global consumer spending on legal marijuana is projected to reach $57 billion by 2027, with North America representing the largest spending at $47.3 billion [1].  In terms of sales, flower sales currently represent the largest source but oil extracts and derivatives are now becoming the fastest-growing segment of the industry [2].

One of the latest trends in this budding industry is extraction.  Extracted products provide an alternative to consumers to smoking dried marijuana.  Oils, edibles, and concentrates are garnering big attention among the masses and investors alike.

Luckily, we have discovered a company placing itself in a position to take over the cannabis industry by storm, Ionic Brands (CSE: IONC) (OTC: IONKF).  Until recently, this marijuana stock has been flying under the radar, but now we can say it has our full attention.

This Marijuana Stock Is Poised For Growth

Washington state-based luxury cannabis concentrates company, Ionic Brands (CSE: IONC) (OTC: IONKF) is making a name for themselves in the marijuana industry.  Following its emergence into the medical portion of the industry in 2012, Ionic expanded its reach to the recreational market in 2015. Fast forward to today, the company has now become the largest manufacturer of cannabis oil in the state and claims bragging rights as the #1 Vape Brand in Washington.

Coming off the success seen in the state of Washington, Ionic Brands has identified its key target states to focus operations. This includes California, a massive market for sales forecasted to hit $7.7 billion by 2022 by ArcView Market Research and BDS Analytics [4], as well as the states of Colorado, Massachusetts, and Nevada.

Let’s talk about revenue.  Ionic Brands (CSE: IONC) (OTC: IONKF) began selling its flagship premium vape pen in 2015 and has seen increased revenue, which has grown at CAGR of 110%, consistently for the past three years. Last year, the company reported $9.9 million in sales with $9.3 million generated in Washington, $0.5 million in Oregon and $0.1 million in California, respectively [5].

As Ionic Brands (CSE: IONC) (OTC: IONKF) increases its operational footprint throughout its target markets, based on the success it has seen in Washington these figures should grow, FAST!

Ionic Brands (CSE: IONC) (OTC: IONKF)’s strategy is clear, expansion.  Their focus resides in the highest value segments of their supply chain, beginning with cultivation and ending with distribution. Ionic Brands is in the process of closing 5 acquisitions in which LOI’s are in place. Combined these acquisitions are forecast to add $30 million to 2019’s estimated revenue:

Ionic Brands (CSE: IONC) (OTC: IONKF) intends to drive revenue to new highs through these acquisitions.  By increasing current market share and emerging into new markets, Ionic Brands (CSE: IONC) (OTC: IONKF) is estimating that 2019’s revenue should be in the ballpark of $48.6 million and grow at an estimated CAGR of 82% through 2021.  THAT IS HUGE!

The best experiences in life are meant to be shared according to Ionic Brands (CSE: IONC) (OTC: IONKF). Its innovative concentrates brand Ionic is targeting the cannabis “mood” specific market with three distinct mood offerings and available across the entire product line.

RELAX is a truly noteworthy blend to savor while you sit back and unwind. The third mood formula FOCUS (sativa) is a prolific experience crafted from the highest quality Sativa strains, is balanced and delightful.

FOCUS is an exquisite blend enjoyed while being creative or collaborative. Offering the three mood enhancements to each of Ionic’s six product lines results in 18 different options all designed to generate brand loyalty and bottom-line revenue.

Lucid Green is a technology company that was the first in the cannabis industry to develop a direct-to-consumer data platform, that enables consumers to have a safe, consistent and enjoyable cannabis experience. Lucid Green will hit shelves on Ionic packaging in early May 2019. Ionic Brands (CSE: IONC) (OTC: IONKF) is the first company to launch LG in California and will be expanding the LG platform to Washington, Oregon and Nevada. Ionic could set the bar for trust and transparency in California by partnering with Lucid Green to ensure that consumers have all the information they need to have a safe, consistent and enjoyable experience.

The focus for investors right now is on cannabis 2.0. We saw how the industry evolved during the early years but now it’s about much more than just opening up a pot company. The name of the game is mergers and acquisitions right now and it isn’t just the “big boys” of pot doing these multi-million dollar buyouts. Ionic Brands (CSE: IONC) (OTC: IONKF) is taking a page out of their book and rapidly expanding its entire distribution and supply footprint.

For starters, Ionic Brands (CSE: IONC) (OTC: IONKF)‘s $8.8 million acquisition of Vegas Valley Growers North puts the company right in the middle of one of the fastest-growing cannabis markets in the US. According to Arcview Market Research and Nevada State Department of Taxation, medical and adult-use spending on cannabis is projected to be over US$400 million in 2019 and US$500 million in 2020. 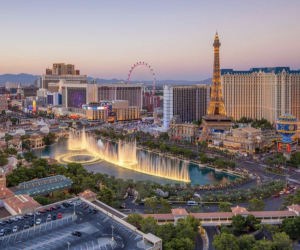 Sales records were set during the first six months of 2018 where Nevada sold more than US$195 million in cannabis products compared to US$67 million in Washington State and US$114 million in Colorado in the same period. So it stands to reason that positioning for Nevada’s growth could be well-timed.

And the VVG acquisition brings more than just geolocation for Ionic Brands (CSE: IONC) (OTC: IONKF) includes the lease for a 1,700 square foot production facility, situated on 3.42 acres of land. VVG is currently building a 60,000 square foot manufacturing facility with an expected completion date of Q3 2019. A second 80,000 square foot facility is planned for Q4 2019.

The VVG acquisition also includes four state licenses in hand for cultivation and manufacturing for both medical and recreational cannabis. This “little pot company,” VVG is projecting 2019 revenue of US$6.6 million, expected gross profits of US$3.1 million and EBITDA of US$2.0 million.

During the summer of 2019, Ionic Brands (CSE: IONC) (OTC: IONKF) signed an exclusive Heads of Agreement with Lifespot Health Limited to develop and distribute Lifespot’s software and vaporizer technologies. Not only does this joint venture prove to expand the company’s product line (we’ll explain next) but Lifespot is an Australian publicly-traded company. Lifespot could also provide significant value to a joint venture deal beyond product collaboration.

The Joint Venture provides 12 months exclusive distribution of Lifespot vaporizers to Ionic in the United States and Canada and to the Ionic-owned brand, Astleys of London, in the United Kingdom. The Company may be granted additional territories over time as needed to meet market demand.

Could this deal have perfect timing written all over it? Ionic Brands (CSE: IONC) (OTC: IONKF)’s launch and distribution of the Slim-line Vape is expected to start in Q3 2019 in some of the biggest legal cannabis markets in the country:

The Slim-line Vape is the first Bluetooth enabled vaporizer and platform designed specifically for the use of cannabis.

Branding is what sets apart the elite from the standard. The tyrants at Ionic Brands (CSE: IONC) (OTC: IONKF) come with heavy credentials to form a juggernaut leadership that has established luxury cannabis brand.

Building and leading technology companies worth over $500 million, chief executive officer John Gorst is a legend. Having been able to raise over $30 million in previous business ventures, Mr. Gorst is the largest early investor at Ionic Brands (CSE: IONC) (OTC: IONKF). This is a huge motivator for him after already leading four different companies towards success.

Most investors are aware that Aurora Cannabis (ACB) has become a household name, however, this did not happen overnight.  Aurora too had their start on the OTC exchange prior to going through a major up-listing. Since, the company has seen revenue growth of over 350% [6], with 30% of its sales from oil.

Aurora saw the potential in the extraction market and went after it through inking a deal with Radient Technologies as its extraction technology partner and since has expanded its footprint through two other acquisitions.

With a large company like Aurora getting involved in the extraction and oil segment, it shows the tremendous potential of the market.   Being that Ionic Brands (CSE: IONC) (OTC: IONKF) has already established a loyal customer base and a leading luxury brand, it could provide investors with a first-mover advantage in this lucrative market.

The Time is Now!

You can’t argue that Ionic Brands (CSE: IONC) (OTC: IONKF) has done a fantastic job demonstrating future growth initiatives to become a market leader.  With 5 acquisitions on the line to further enhance every single value segment of their supply chain, this marijuana stock is ready to dominate the market.

With the support of an elite management team backing this top-rated luxury cannabis brand, it comes without question that Ionic Brands (CSE: IONC) (OTC: IONKF) has a chance to rise to the top of the industry. As the company brings its expertise and success into other key states, the potential of becoming a huge revenue producer is there.

The question to investors is, will you take advantage of the opportunity now or wait until it is too late?

With the marijuana movement making an influential impact over the last…

2 Marijuana Stocks To Watch Before Next Month

When disaster strikes, marijuana dealer is usually the last person a…