Since the inception of MarijuanaStocks.com in 2014, our Connect the Dots Featured Articles have quickly become one of the most highly anticipated content releases in the cannabis industry.

Hey Marijuana Stocks… what’s a Connect the Dot’s article? Every once in a while, we highlight a cover story on a marijuana stocks company that we believe has strong near-term potential for investors.

As most of you know publicly traded cannabis companies pay us to help increase awareness by means of online marketing and content creation. In the past, some of our Connect Dot’s articles were from marijuana stock companies that paid us for our services.

Our Connect the Dots articles are not something we take lightly and not something we do for just any cannabis company regardless if they are a paying client or not! Over the years we have worked with sixty (60) different publicly traded marijuana companies of which only 11 have made “the cut” in five (5) years, since our inception in 2014.

Since 2014, we have identified no more than eleven (11) companies worthy of such coverage and research. So the track record of this elite group of companies is astonishing, even potentially life-changing for our followers. Five (5) of these companies have gone on to gain more than +1,000% following our initiated coverage.
(The over 1000% gain for the specific time period reflected above should not be construed as any indication whatsoever of the profiled company’s future stock price.)

As the cannabis industry has exploded experiencing growth not seen since the Internet Boom or Gold Rush, so too has our viewership and member base. We take great pride in providing valuable content and industry commentary for you. We take great pride in connecting the dots and helping investors navigate what has become a crowded marketplace with over 300 marijuana companies now public, up from less than 20 just a few years ago. However, this rapid growth has come to a tremendous opportunity. Also, our new Connect the Dots feature could unlock the most significant industry opportunity of 2019.

Connect the Dots Track Record – Try Not to Laugh, or Cry

As we take a look at the performance of some of our past feature companies, old members will get butterflies at the mention of a company called BizAuctions.com (BZCN), which later changed its name to, and what you may now recognize as, CannaGrow Holdings (CGRW). Old members may get butterflies at the mention of this company because it holds the record for single largest gain following the publication of a Connect the Dots feature article.

We published a Connect the Dots article on BizAuctions at the end of October 2014 while the stock was trading at a measly $0.06 after unveiling its plans to enter the cannabis industry. Some questioned us, some even laughed. However, after running to $1.05 just three (3) months later, it was our staff and loyal followers that were laughing at a +1,650% gain. (Click here to read the article)

However, BizAuctions, now officially CannaGrow, wasn’t done. Fast forward a couple of years, and CGRW soared to highs of $3.45 to claim the top spot on our gainer’s list with a ridiculous +%5,650 gain. The laughs were replaced with tears. Try not to laugh, or cry, after looking at the CGRW chart below. 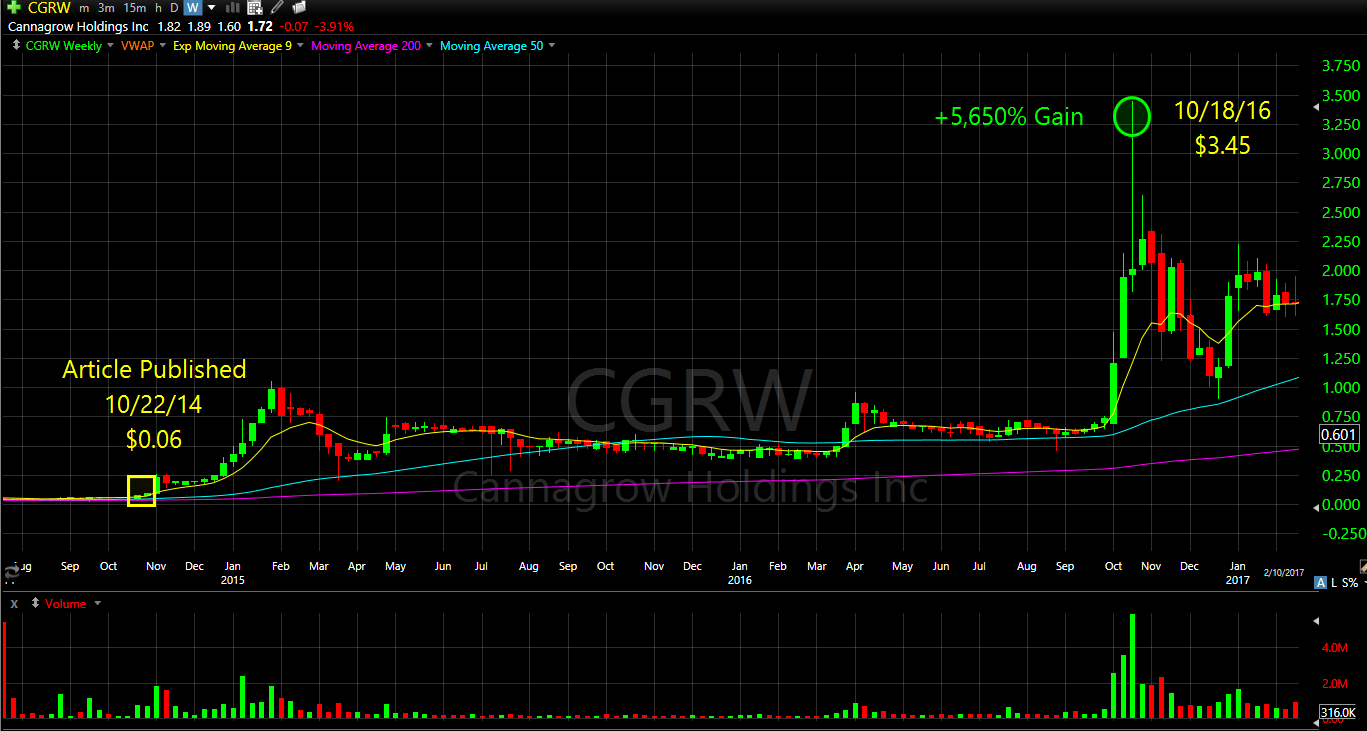 This feature is a perfect example of how we like to be ahead of the curve. The whole point of us connecting the dots for you is to help identify opportunity before the rest of the market takes notice. Over the last several years, we and our viewership have been positioned ahead of significant industry trends. For example, before the mainstream media even began talking about Canada possibly fully legalizing marijuana both medically and recreationally, we at MarijuanaStocks.com saw the storm coming from miles away.

We’ve Been Miles Ahead of the Curve

On October 3, 2016, we published a feature article highlighting what we identified as a tremendous opportunity in the major Canadian operators. We knew at this time that the Canadian market was far more developed and more mature of a market compared to the United States. Canada later went on to fully legalize marijuana nationwide, and we connected the dots for investors helping them identify the strongest players poised to capitalize on a booming Canadian market. We titled this article Past, Present, and Future of Canadian Marijuana Stocks.

Here is how the Marijuana Stocks Companies we Highlighted Performed Following the Featured Article! 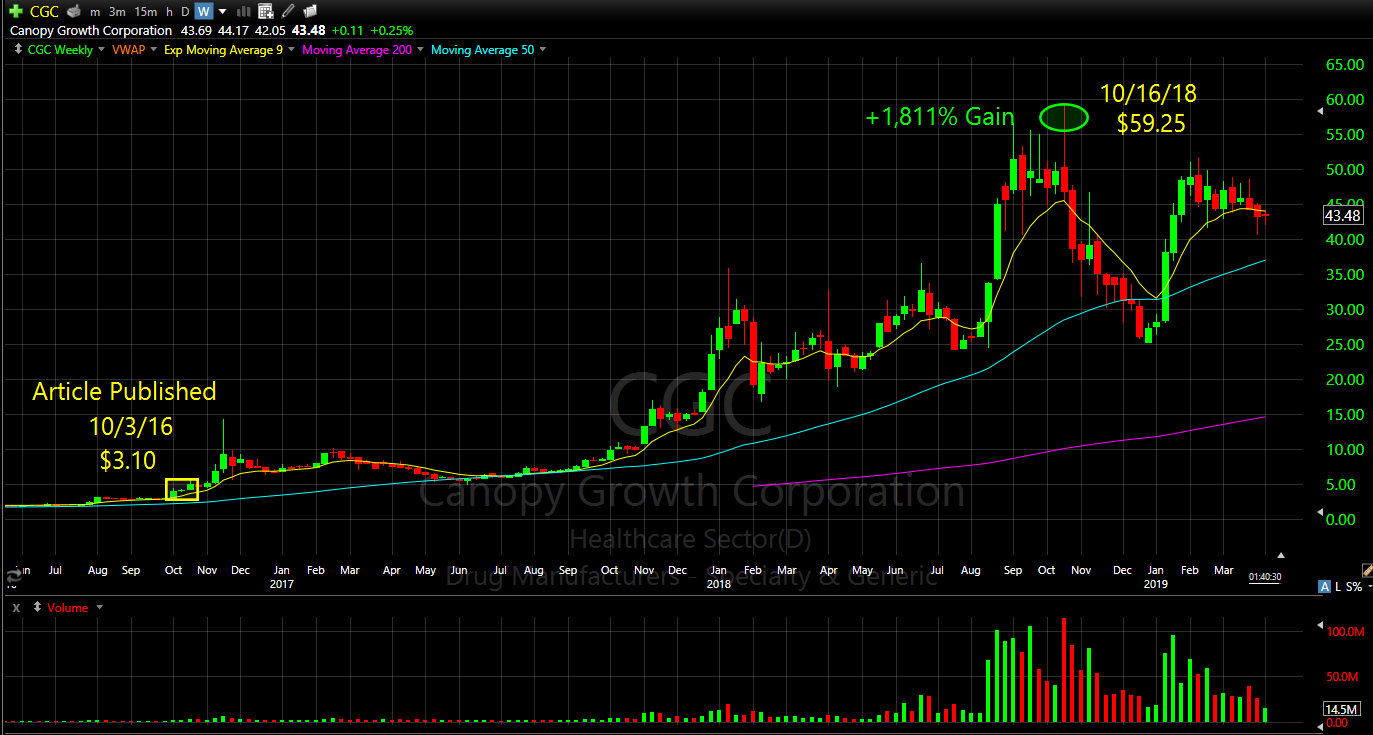 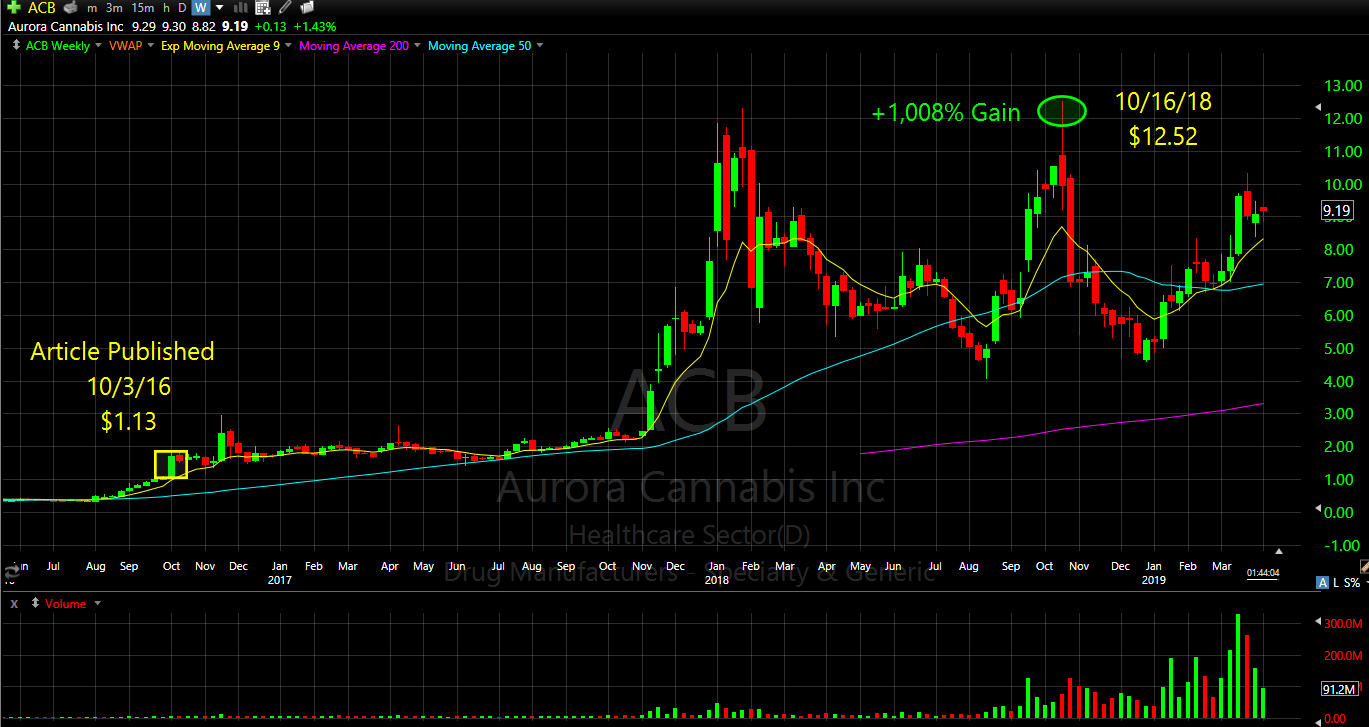 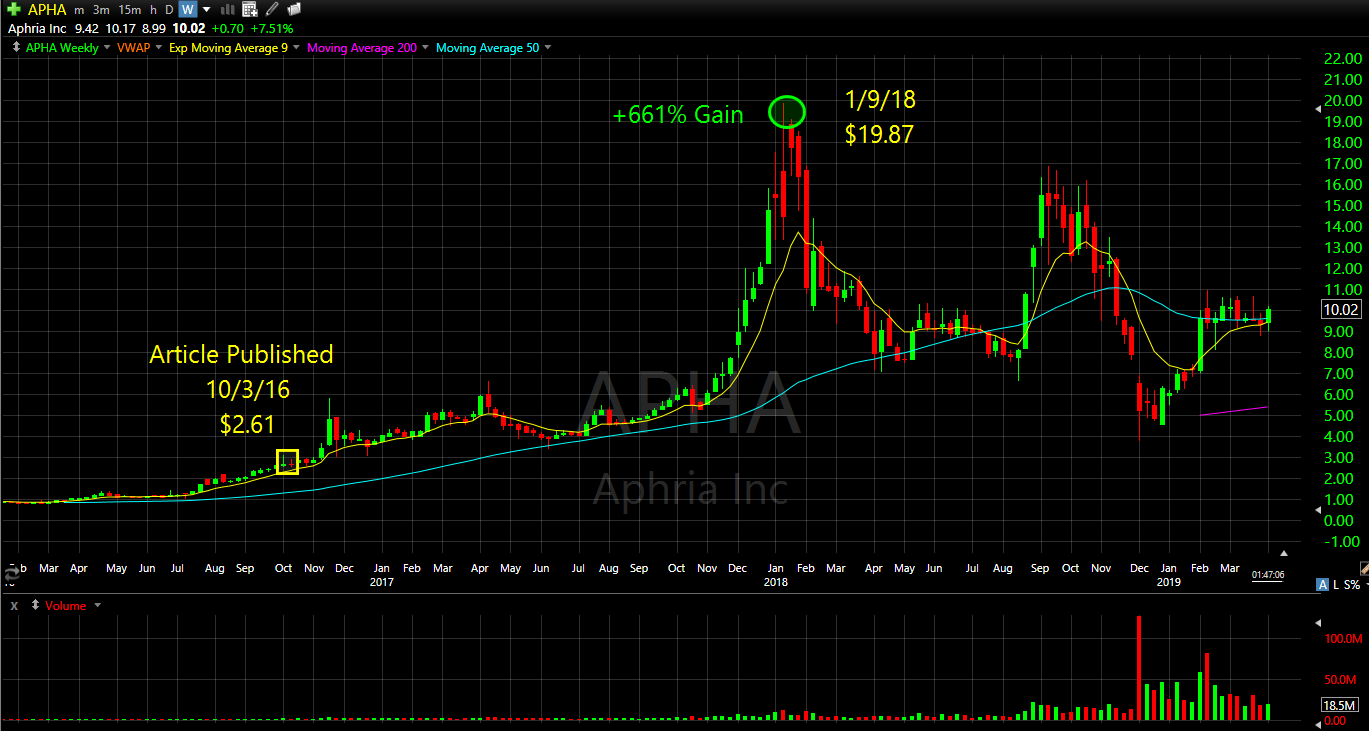 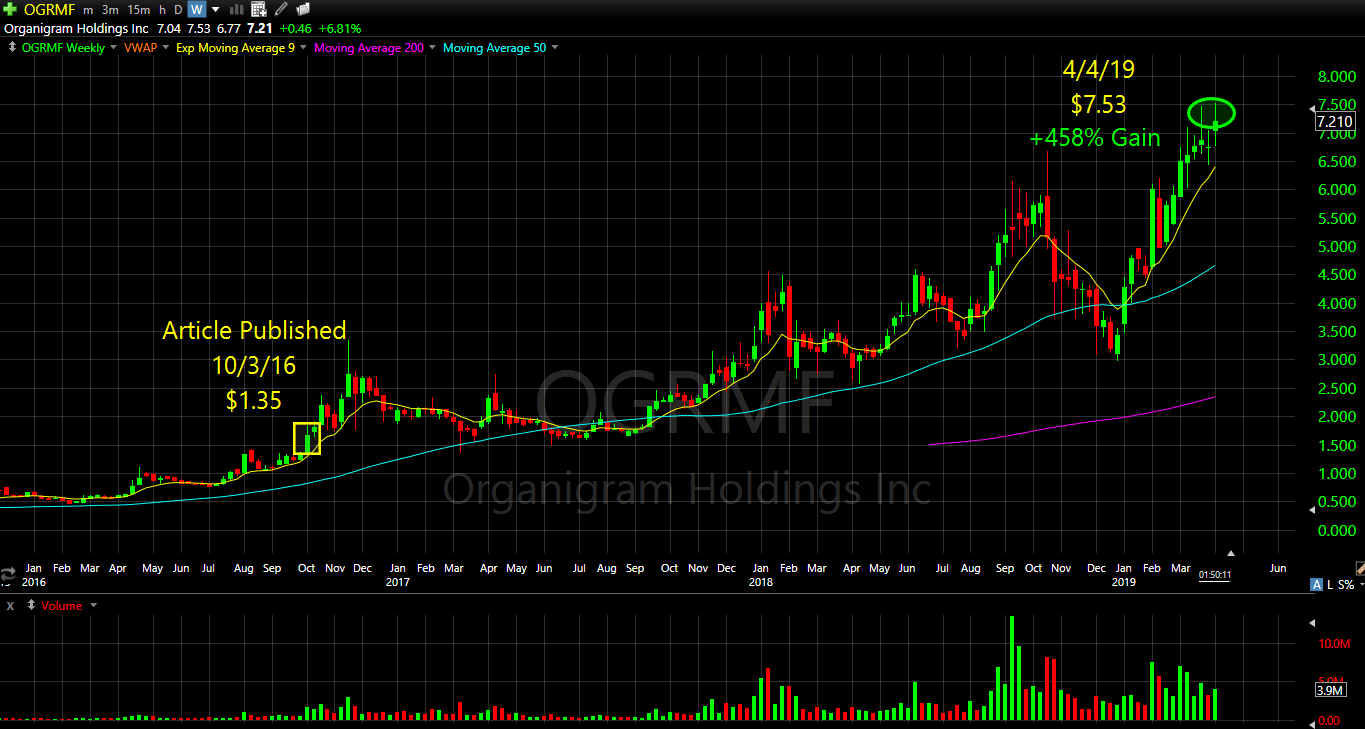 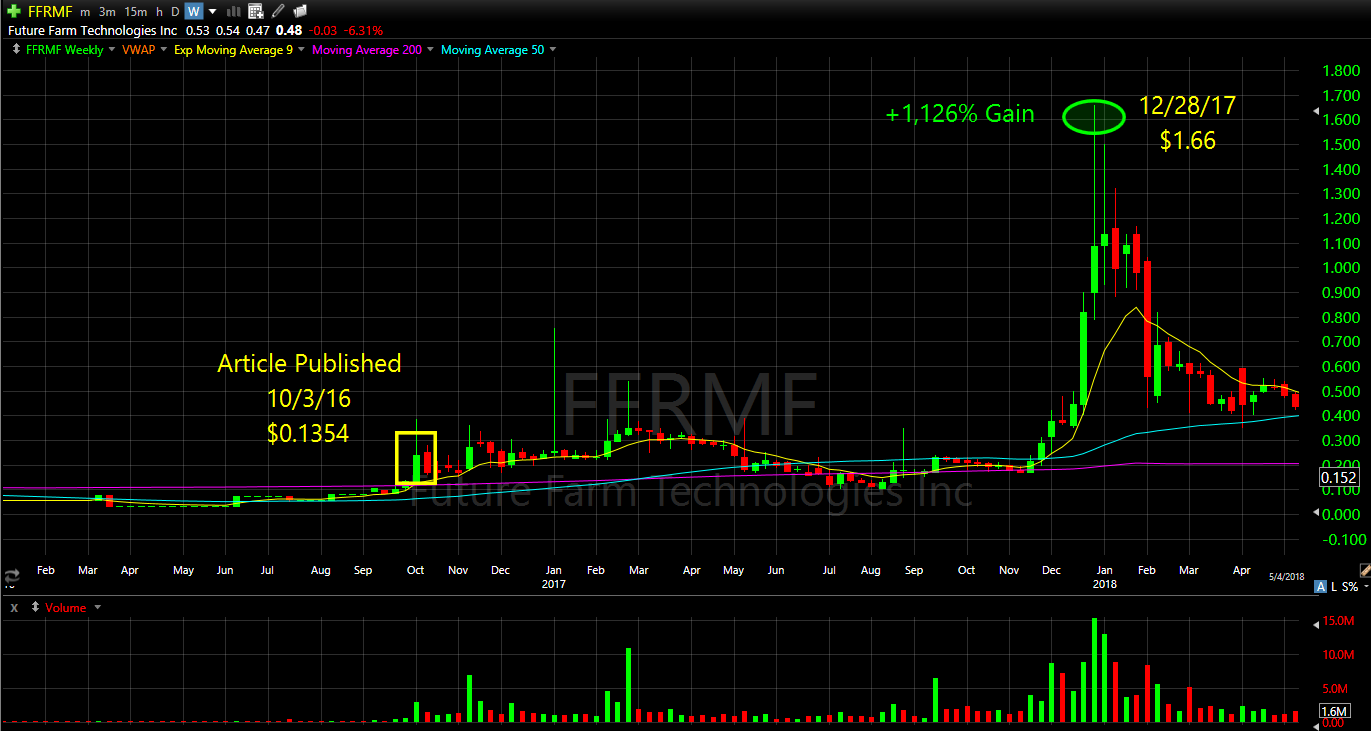 What is Smart Money Doing in Marijuana Stocks?

One thing that has remained constant with our Connect the Dots features, other than the fantastic gains seen shortly after our initiated coverage, is the simple fact that we seem to identify opportunity way ahead of the rest of the market. After looking at the charts above of some previously featured companies, you notice that we have consistently been ahead of the curve. We do not initiate coverage at the top of the hype while momentum is soaring, and the entire street is talking about a stock. No. Because that’s when “smart money” is taking profit. “Smart money” is defined by Investopedia.com as the capital being controlled by institutional investors, or the professionals. So although we are not licensed financial professionals, we like to think that we think like them. Also, our track record has a lot to do with that.

Like we said earlier, we take great pride in identifying a near-term opportunity with long-lasting potential for our readers. Our Connect the Dots features are not meant to be a flash in the pan. One day wonders based solely on hype. We put a lot of time and effort in digging deep into these companies and their management teams to help uncover this growing industry’s hidden gems. So the time has come for us to release our first

At the beginning of this article, we told you that you would soon be more excited than a kid opening gifts around the holidays. So now you know why. We don’t know about you, but at this point in our lives, we’ll take a triple digit or even quadruple digit gain over a toy truck or ballerina doll any day.