The Canadian medical marijuana industry continues to be a major bright spot in the cannabis sector as the industry exits the fringes and enters the mainstream. The main catalyst in our estimation is a simple, yet integral one; successful management teams. These management teams have done what many companies in the United States have been unable to do by executing on a business model that has stayed the course (rather than change directions every six months). Beyond good management teams and the execution of business models there have been a few Canadian companies have seen the forest through the trees ahead of some landmark decisions. We have seen public company Tweed Inc (OTC: TWMJF TSX: CGC) and private cultivation juggernaut Tilray do exceptionally well by sticking to their business models and taking measured risk ahead of legislation. One the biggest developments in 2015 was the victory by Justin Trudeau and the Liberal Party as they will make cannabis legalization a priority. The outcome of the campaign was a huge victory for the Canadian cannabis industry and it has already severed as a catalyst for stocks leveraged to the expansion of the cannabis industry.

The Canadian government’s plan to legalize cannabis in spring 2017 has made several licensed medical cannabis producers attractive investment opportunities to institutional investors, hedge funds, and investments banks. Money is being invested in not just cultivation, but compliance, infrastructure, efficiency applications and Grow Tech.

In the last two months, licensed medical cannabis producers have raised more than $100 million of debt and equity, which will be used to support growth initiatives like land acquisitions, company roll-up acquisitions, facility expansions, etc all to service the estimated 40,000 medical patients and other ancillary services needed for Canadian expansion. These numbers will likely increase as the Trudeau administration likely wants to take cannabis recreational nation-wide which will benefit, not just some of the usual suspects like Tweed & Tilray, but other companies in the Canadian Cannabis following some of the sector leader’s models and expanding on them.

Canopy Growth Corp (CGC) (TWMJF): Canopy Growth is the largest legal medical marijuana producer in Canada and it has been one of the most attractive investment opportunities in the cannabis sector since going public in 2014. The US price is up 50% since July of this year with a 52 week high of $3.23USD with a 9/30/2016 close price of $3.07. 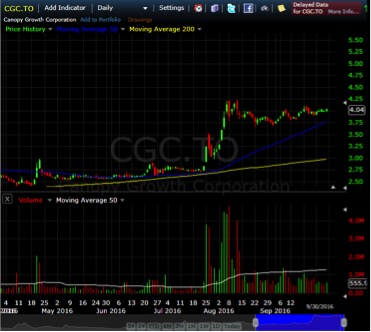 Aurora Cannabis (ACB) (ACBFF): Aurora Cannabis is one of the fastest growing licensed medical cannabis producers in Canada. One thing to know about them is that they recently did a private placement for $20,000,000 and ended up being over-subscribed by a few million dollars. Any company can raise money, but if you’ve ever looked into their investor deck or seen the facility they have built out it’s hard to not be impressed, which is why we added it to our focus list in June of 2016. Since July of 2016, ACBFF is up roughly 125%. 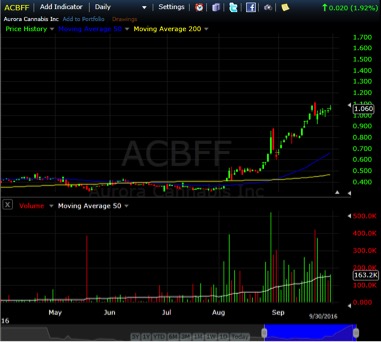 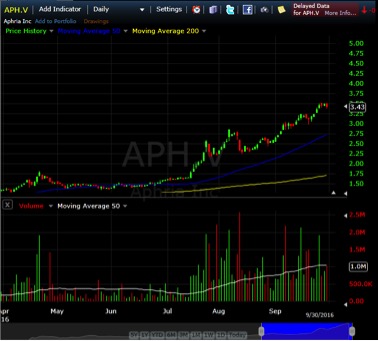 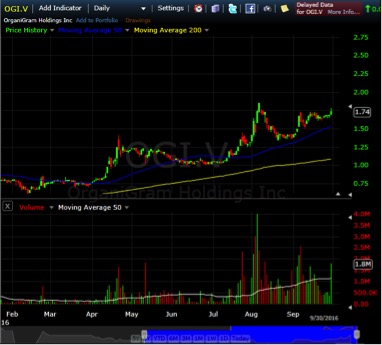 The Newcomers You Should Be Watching:

Arcturus GrowthStar Technologies Inc: (CSE: AGS, OTC: AGSTF) Arcturus is a company focused on acquiring and developing technologies in order to position itself -as the leading play in the Controlled Environment Agriculture (CEA) market. AGS provides CEA systems that utilize minimal land, water and energy regardless of climate 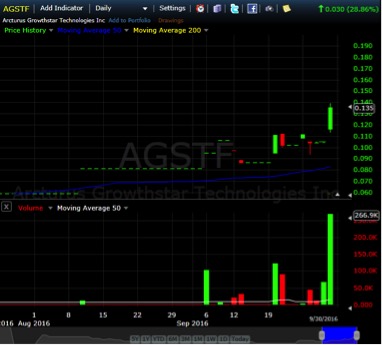 Arcturus GrowthStar Technologies Inc. (OTC: AGSTF) is a relatively new Canadian issue dual-listed on the OTC that is beginning to garner investor interest. Recent increase in trading activity could be foreshadowing a much larger increase in share price as the entire Canadian marijuana market experiences a bull rush. Companies with good management and solid business plans are being acquired by retail and institutional investors alike. Arcturus is one to keep an eye on.

Pharma Can Capital Corp is a holding company for Licensed Producers under Canada’s Marihuana for Access to Cannabis for Medical Purposes Regulations (“ACMPR”). With interests in five licensed producers and three license applicants, PharmaCan is focused on building iconic brands providing patients with compassionate, personalized care. We recently met them at the Lift Cannabis Expo in Vancouver and were impressed by the medicine they are producing for patients and the genius of hiring Canadian cannabis advocate Matt Mernagh to spearhead the marketing of the company. I view Matt Mernagh as the ultimate checks and balances as he has been one of Canada’s biggest champions of legalization and he would never stand behind medicine that wasn’t top notch. 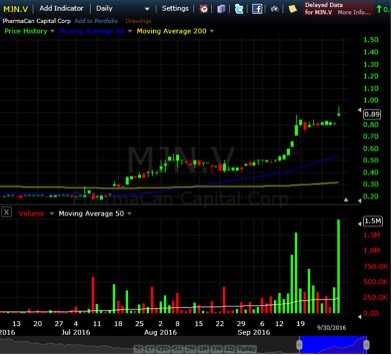 When dealing with pharmaceutical medication, pain killers in general can be a…

CBD is well-known for its health benefits, especially in treating rare seizure…

Marijuana stocks have had a great year, to say the least, as…