Home We at Marijuana Stocks Were Indeed Correct

We at Marijuana Stocks Were Indeed Correct

For the last couple days, we have been analyzing and bringing to your attention what we believed to be a descending triangle breakout pattern occurring in our latest feature, Premier Health Group Inc. (OTC: PHGRF) / (CSE: PHGI). And the trading action on February 26, 2019, confirms we were indeed correct as we saw trend confirming breakouts in both the US and Canadian markets.

In just the last 2 days, we have seen as much as a +11% gain in both the Canadian and US market. 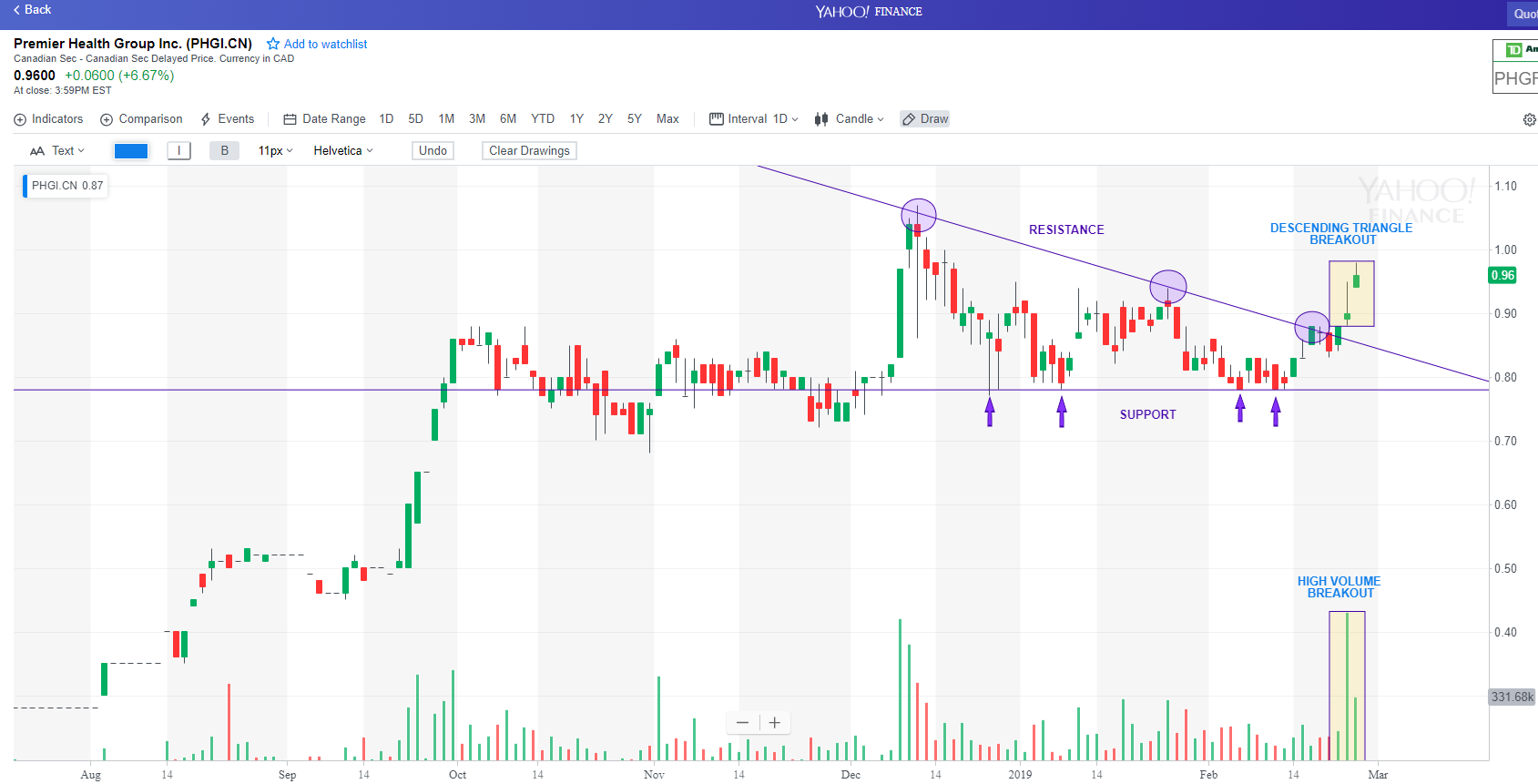 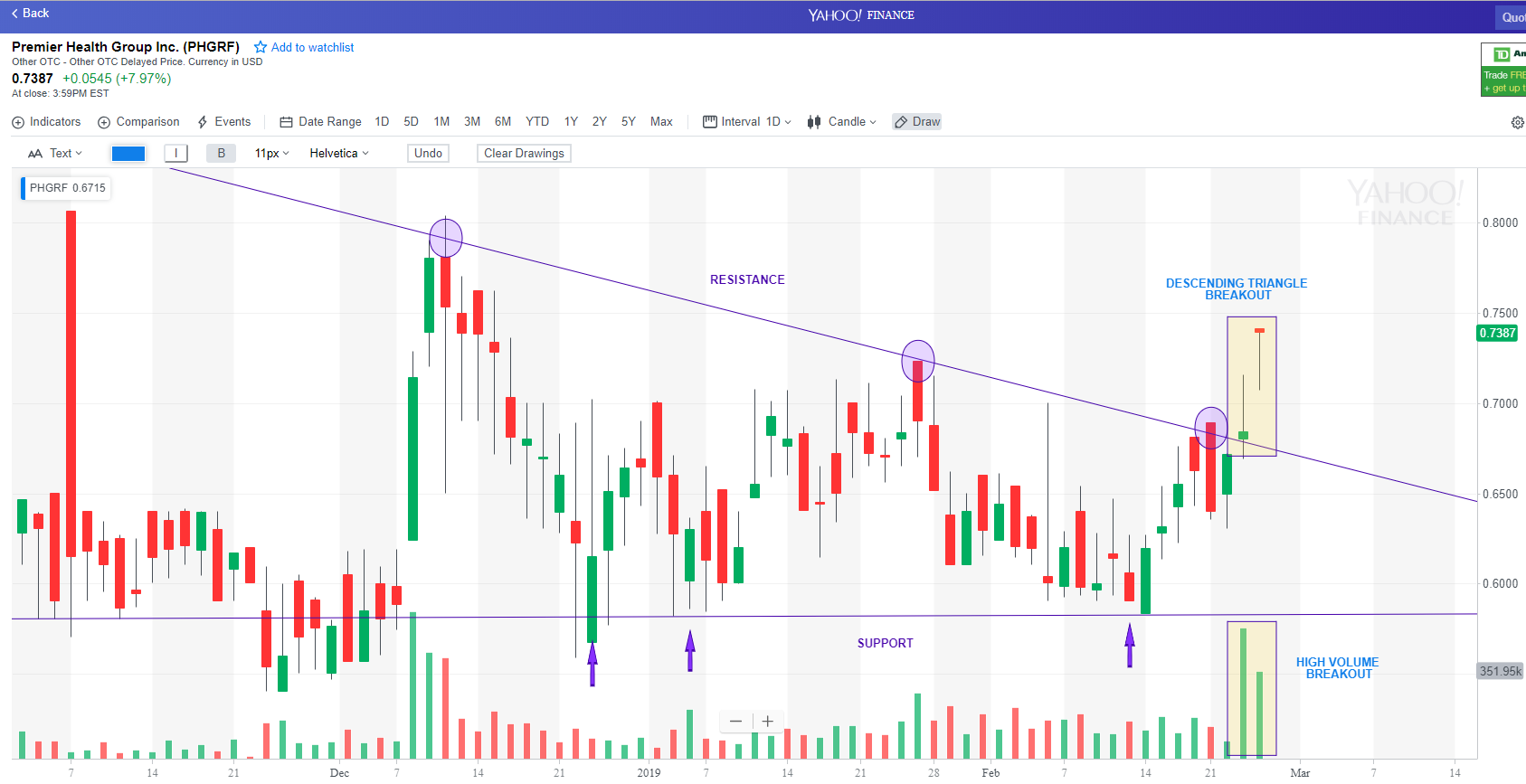 Click Here to Read Our Full Report on Premier Health Group Inc. and See When We Initially Identified the Descending Triangle Pattern.

In addition to our own analysis, we provided numerous examples of similar descending triangle patterns and pointed out the large moves higher the stocks experienced shortly after this pattern formed. We cited numerous leading financial websites and blogs to conclude that a potential short squeeze and huge move higher could be on the horizon for Premier Health Group Inc.

Click Here to See What Happened to Other Stocks After Breaking Out of a Descending Triangle Pattern.

We Were All Over This Breakout!

But lucky for you, we at Marijuana Stocks identified this pattern several days ago and brought it to your attention on Sunday, February 24, 2019, BEFORE the breakout of the descending triangle. So, the question to ask now is, “Where do you see (OTC: PHGRF) / (CSE: PHGI) going from here?”

“The height of a triangle at its base, or widest part, provides some clues as to how far the price could run following the breakout. To get this estimate, add the height of the pattern to the breakout point in the event of an upside breakout.”

The website uses the below chart as an example when trying to determine a price target following a descending triangle breakout: 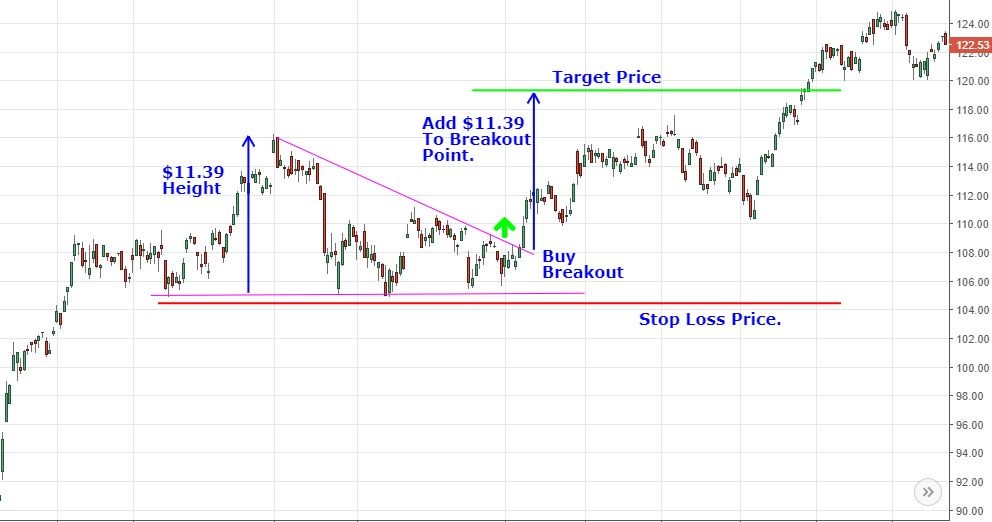 If we apply this same logic and theory to the chart of (OTC: PHGRF) and (CSE: PHGI), we find that the stock could still have at least another 24% and 22% of room left in this breakout move, respectively.

If Investopedia’s theory and analysis of descending triangle breakouts is correct, that would mean there could still be a huge move ahead for Premium Health Group Inc. (OTC: PHGRF) / (CSE: PHGI) The uptrend appears to be in a confirmed continuation pattern with well above average trading volume over the last 2 days. In fact, in both the US and Canadian markets, we have seen some of the heaviest volume ever traded.

In addition to the exciting technical analysis and breakout chart pattern in (OTC: PHGRF) / (CSE: PHGI), Premier Health Group Inc. just announced it is growing its development team at Cloud Practice Inc. to support the Company’s focus on digitizing health care. The Company recently hired four new full-time employees, three Web Software Developers and one User Interface/User Experience (UI/UX) Designer, to support the build-out of its patient-centric platform and mobile app – a beta version of which will be available by end of Q2.

With all the exciting technical indicators appearing to be suggesting a confirmed uptrend, this news of corporate team expansion could possibly add even more momentum to the recent breakout.