Home Marijuana Stocks: New Opportunity Ahead For This CBD Company

Marijuana Stocks: New Opportunity Ahead For This CBD Company

A New Marijuana Stock To Watch, Breaking Barriers In CBD

MarijuanaStocks.com has always made it a point to stay far ahead of the curve. When we see a hint of opportunity, we make sure to look into it and then focus on all angles of potential that could come with it. About 4 weeks ago we began to talk about a company who’s name didn’t give it justice but due to the fact that there was an LOI on the table, it couldn’t be overlooked.

CNRP Mining, Inc. (CRPGF) Signed an LOI that will Give them EXCLUSIVE WORLD-WIDE LICENSING to an Existing line of CBD Infused Nutraceutical Products that are Already Producing Revenue!

But what was just announced on August 22 could be exactly the signal that we’ve been looking for and here’s where we think a lot more people are going to start paying attention.

(CRPGF) announced that further to the Company’s press release on July 21, 2017 and in conjunction with its non-binding letter of intent (the “LOI”) to acquire X-SRAYS, it has advanced USD $300,000 to X-SPRAYS. Furthermore, (CRPGF) anticipates signing a definitive agreement for the acquisition in September 2017. 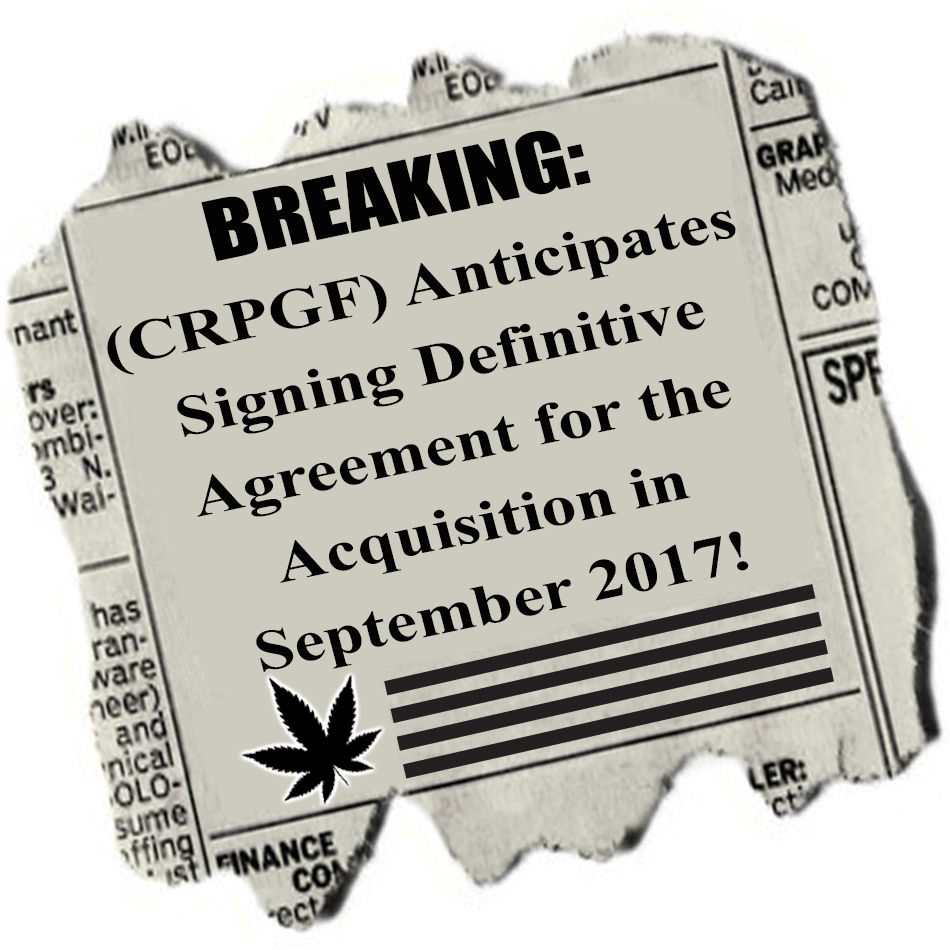 This news comes within days of September and right now our members have had the opportunity to get (CRPGF) on their radar for almost 4 weeks now.

Why is this timing so important? Well, in all seriousness, what company advances a potential acquisition target $300,000 if there isn’t a serious motive?!

Not only that but if you read the press, you’ll also see that (CRPGF) intends to close its previously announced non-brokered private placement offering of up to $3,000,000! (CRPGF) is Targeting an Opportunity with a Massive Market Demand. X- Sprays has executed extremely well with its product line of 8 novel sprays that include both hemp CBD and Nutraceutical ingredients (4 with CBD and 4 nutraceutical).

Hemp-Based CBD is becoming a booming market with considerable growth expected in the coming years. Many companies have seen considerable growth in their sales since they began in this market. As CBD is not a controlled substance, it is currently within easy reach of many people, and its heath benefits are in abundance.

The Hemp Business Journal predicts the CBD market will have become a huge $2.1 billion consumer market by 2020, an epic 700% increase from 2016. The market has already been the target of industry leaders as there are already more than 800 CBD products in the US state of Washington alone, and there are business from all over the world selling cannabidiol from a variety of vendors – from consumer-based to medicinal.

As more people look for alternatives beyond pharmaceutical medicine, CBD sprays offer a means to a more natural way to medicate and the nutraceuticals industry could be ripe for a shake-up! CBD is making a STRONG Name for Itself within the Nutraceuticals Space, which is projected to be a $285 Billion Industry by 2021.

CBD has been closely associated with the Nutraceutical industry and this segment of the market has been consistently recording above-average growth. In March 2017, Research and Markets released a new report published by BCC Research, which said that the global nutraceutical market should be a $285 billion market by 2021.

Nutraceuticals Could Be The Key To Healthy Margins For CRPGF & Here’s Why:

According to BCC Research, nutraceutical products can enjoy even 100% to 1,500% price premiums over the nearest ordinary competitive products. Premium pricing has become more acceptable to consumers as more of them become educated about their health and actively manage it.

“Despite a trend of reduced consumer spending in the wake of the economic downturn, consumers are willing to pay a significant premium for fortified or high-nutrition products. They’re investing in their health,” BCC Research Editorial Director Kevin Fitzgerald observes. 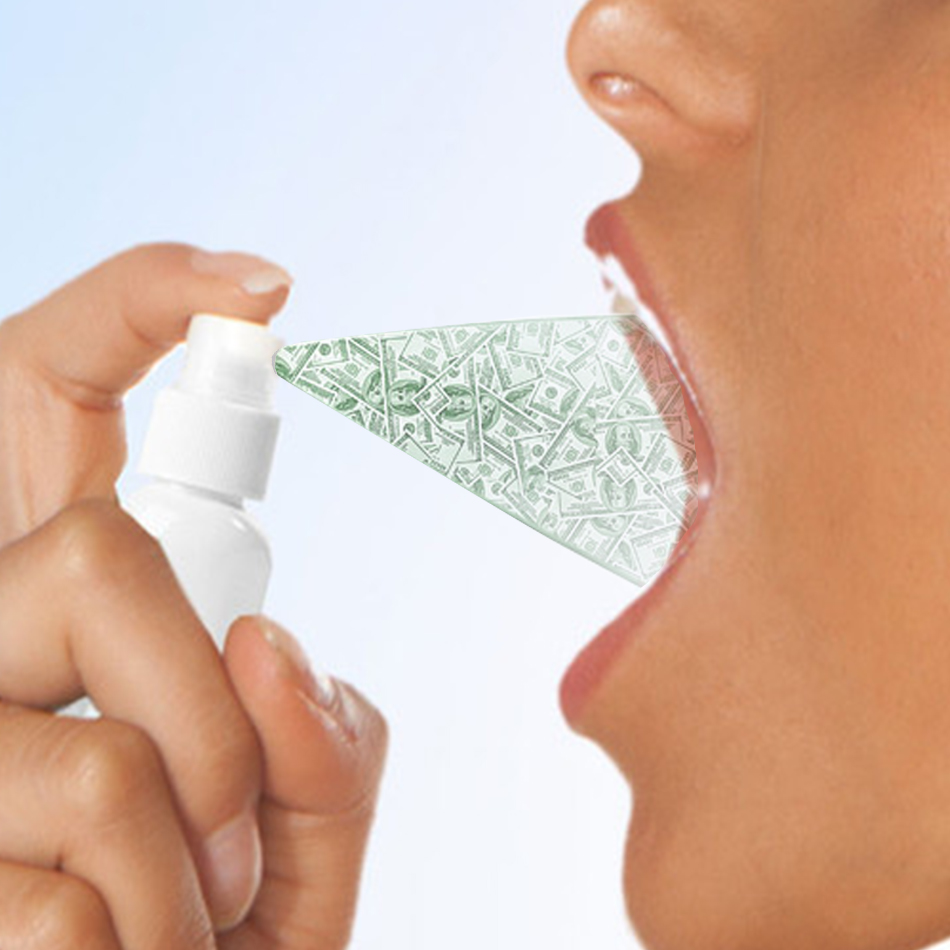 “These investments can be justified as a proactive alternative to costly treatment of disease. In turn, companies are increasing their spending on research and development to produce more efficient and functional products that deliver unique claims. They’re also spending more on branding and advertising products in spite of the economic slowdown.”

And where there may have been other companies with a concept, we’d be willing to bet that few if any of them were anticipating a capital raise of this size to build a brand & sales channel! What other companies do you know that have a subligual spray, are looking to add a THC line, and who come out and say that it intends not only offer but also intends to close on a raise of up to $3,000,000? 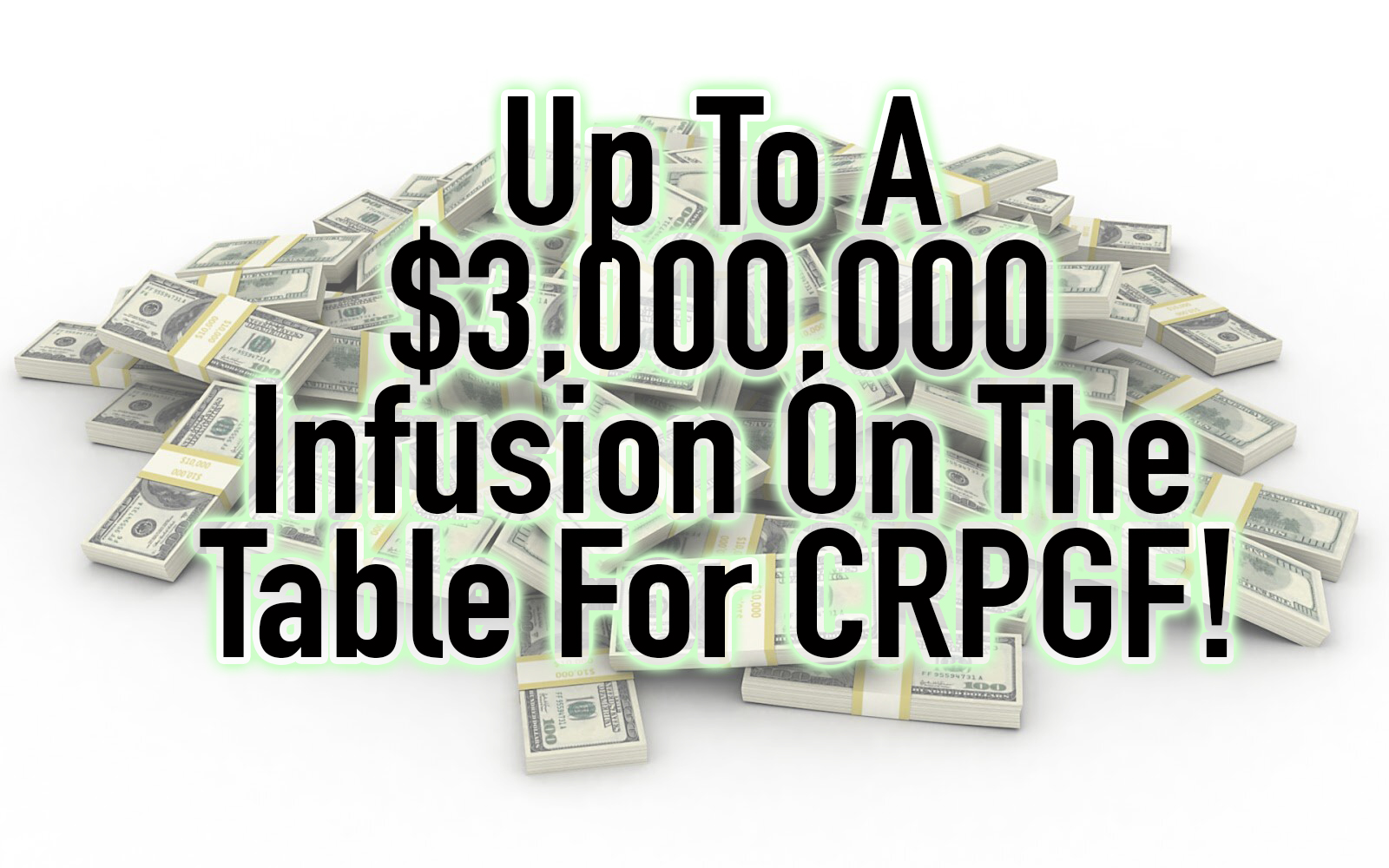 The X-Sprays product line is differentiated when compared to other products on the market and has a unique value proposition through its focus. Once the product can gain traction in California, it can enter new markets and capitalize on new opportunities. By utilizing the capital raised to successfully enter the California market, we will monitor how other distribution channels adopt to this new product.

As the US and Canada gear up for more legalization, this could be an opportunity that you do not want to miss & in our opinion a CLEAR GROUND-FLOOR OPPORTUNITY.(CRPGF) / X-Sprays will be a huge topic on MarijuanaStocks.com as it already has started to become.

It would not take much money or infrastructure for X-Sprays to enter new markets especially considering the aggressive nature of the capital raise they announced. We believe this is a very attractive component of the fundamental story and where many “early stage” companies may stutter step, a lot of that “stutter” can be a direct result of undercapitalization. 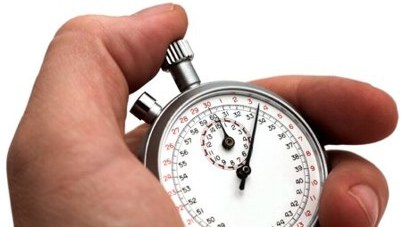 We can’t officially say that this is a “DONE DEAL” but look at what’s happening right now with CRPGF and X-Sprays:

These could all be telltale signs of a true groundswell. This is also just after announcing the initial LOI. The writing could already be on the wall as the company has come out to say, directly that it anticipates signing a definitive agreement for the acquisition in September 2017!

As many of you already know, our track record has been solid when identifying early potential with companies within the space and in our opinion, now could be the time to start taking notice of (CRPGF).

Disclosure: MarijuanaStocks.com is owned by MAPH Enterprises LLC., a Florida Corporation that has been compensated $100,000 by a non-affiliate 3rd party for a 1 year period beginning August 1, 2017 and ending August 18, 2018 to publicly disseminate information about CNRP Mining, Inc. (CND.CN) (CRPGF). We own zero shares. Full Disclaimer