After a wild year for marijuana stocks in 2014,

many of our viewers and members contacted us asking for our opinion and outlook for 2015. So what did we do? The MarijuanaStocks.com team sought out the advice of an experienced, professional hedge fund trader to see how he was maneuvering this market. The following is his report. Enjoy. We sure did.

Trade and Run or Buy and Hold?

Many people have asked me what the best way to invest in the marijuana industry is. My response is not one specific company but rather an overall strategy based on different niche sectors that has allowed me to profit quite handsomely from a market overflowing with uncertainty, regulation and volatility. Understanding how each niche sector is effected by the evolving industry and how investors react regarding the different risk factors of each sector is key.

I compare the Marijuana Industry to the Internet Boom. The similarities from an investment stand point are eerily similar. Although the Internet was not bound by regulation, the volatility and investor craze was unlike anything I’ve ever seen in my career. But you could NOT just simply put your money into any new Internet company and not check it for a year or two. Maybe 90% of the Internet IPOs failed. But that doesn’t mean there wasn’t massive amounts of money to be made trading them. Then, as the industry developed, matured and the potential of the Internet was fully understood by investors, the Apples, Microsofts, and Yahoos began to separate themselves from the rest of the pack. And those were the companies that you could put your money in and not look at it for years to come.

But when an industry is just starting, as the marijuana sector literally is before our eyes, it is nearly impossible to identify the future leaders when there is so much speculation and outside factors like regulatory issues state by state and by the overall government. That is why I am not holding one single “marijuana company” yet. I am trading them. Why? Because any company that is directly affected by regulation of the cannabis plant is not a safe long-term investment, yet. And I stress the word yet because eventually the industry will mature enough to where a select few marijuana companies will be a buy and hold. But for now, trade the volatility. Get in and get out. During the last 8 months, I am averaging 2-3 day holding periods on cannabis stocks.

Now, there is, however, another niche sector of the cannabis revolution that has been a buy and hold. And that is because it is in no way affected by the regulation of the actual marijuana plant. That sector is biotech. Companies using cannabinoid structures to produce various drugs and medicines to treat specific ailments and hopefully achieve FDA approval. To date, this is the only sector of the cannabis revolution, in my opinion, that has been a safe long term investment.

Volatility levels are nowhere near like what we see in marijuana companies. And that is because the success of a biotech company’s stock is much more determined by the company’s ability to execute on their business plan. A marijuana company can execute their business plan quickly and efficiently and receive proper licensing but will still see negative performance if a major regulatory event hinders the industry. Similar to the overall sell-off we saw in marijuana companies when Florida declined the use of medical marijuana. This is why you must trade these companies quickly. There are too many outside factors that will affect your investment.

When looking at biotech companies operating in the cannabis space, you see a very steady and solid long term uptrend. On the other hand, when looking at marijuana companies dealing with the plant or ancillary products, you see a distinct long term downtrend with several quick momentum building trades mixed in between. Here are a few examples of what I’m talking about:

There are two clear leaders in the cannabis revolution and they are both biotech companies. Neither company actually touches the marijuana plant itself and are not held to the same restrictions and regulatory exposure. This has allowed these two companies to execute on their business plans free of outside risk and uncontrollable factors making them safe long term investments to this point. In addition, the biotech sector is the only niche cannabis sector to see institutional support giving the retail investor a sense of security. Now, of course every stock will have its ups and downs, but the point to take from this is that the biotech sector is the only sector of the marijuana revolution still holding significant gains over the past 12 months or longer. 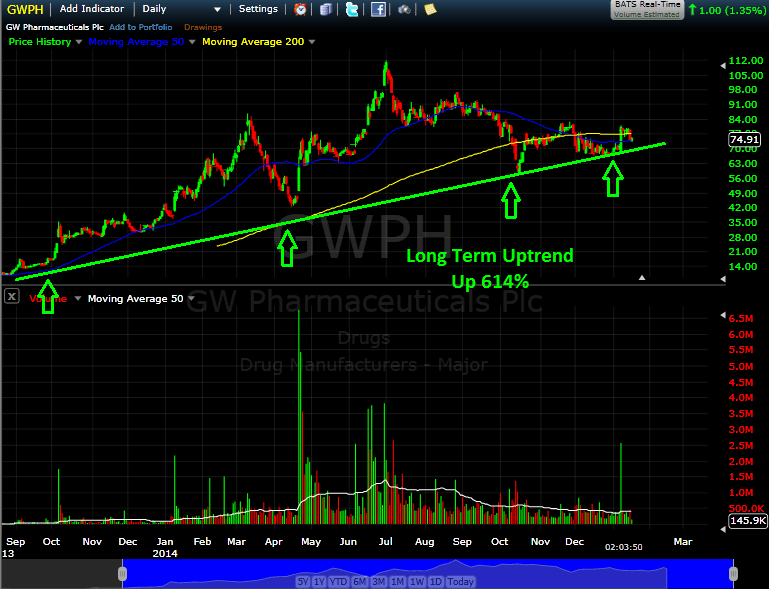 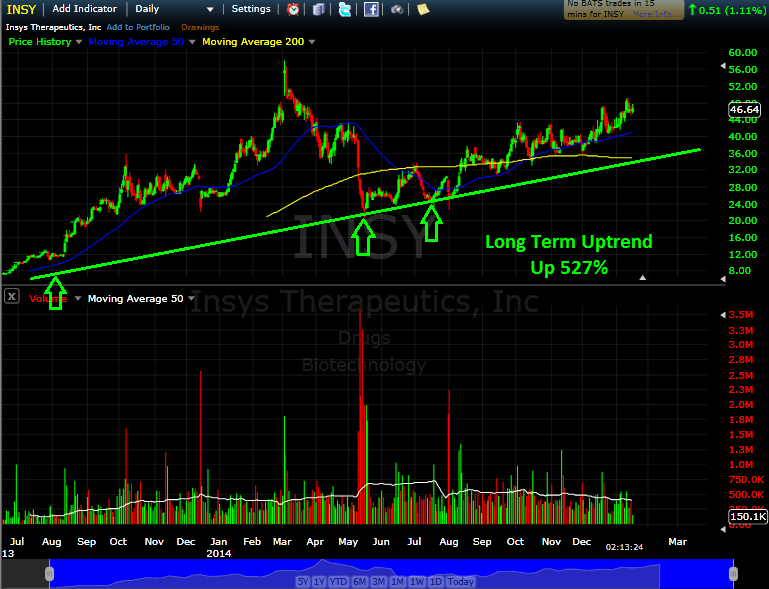 GWPH and INSY are both sporting solid, consistent uptrends while posting gains well over 500% for those who bought and held over the last 12-24 months. The biotech cannabis sector has proven to be the only niche sector to maintain a long term uptrend making it the only sector, to date, worth holding.

Companies dealing directly with the marijuana plant and/or its ancillary products, have been extremely volatile providing excellent trade opportunities. However, anyone who used the buy and hold model in this sector is left with near worthless investments. This is a direct result of the unknown risk element involved with regulatory actions and investors trying to understand how the state by state approval/denial of medical/recreational marijuana will effect a company’s business model. 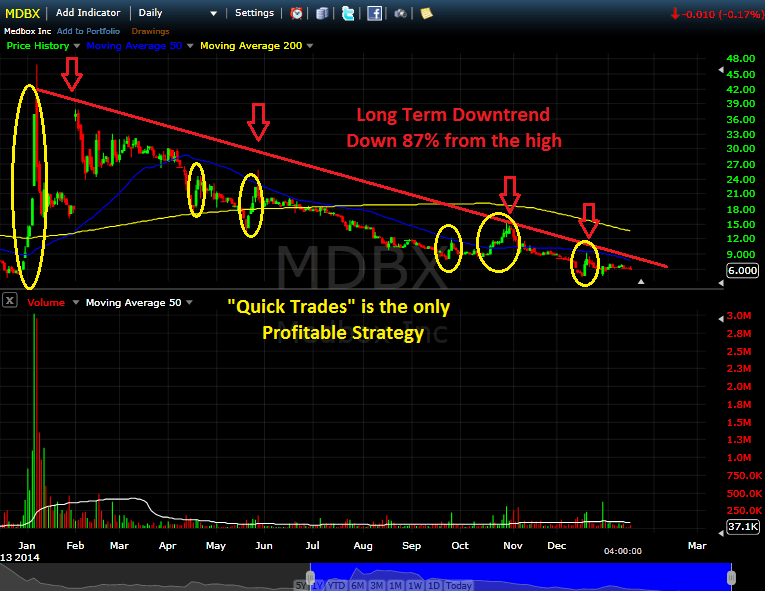 Medbox would be placed in the ancillary products niche sector. As you can see, MDBX has experienced a severe downtrend over the last 12 months. However, there have been several very profitable quick trades throughout 2014. Take your profits and move on. Anyone who left their money in MDBX for an extended period of time saw their investment melt away. 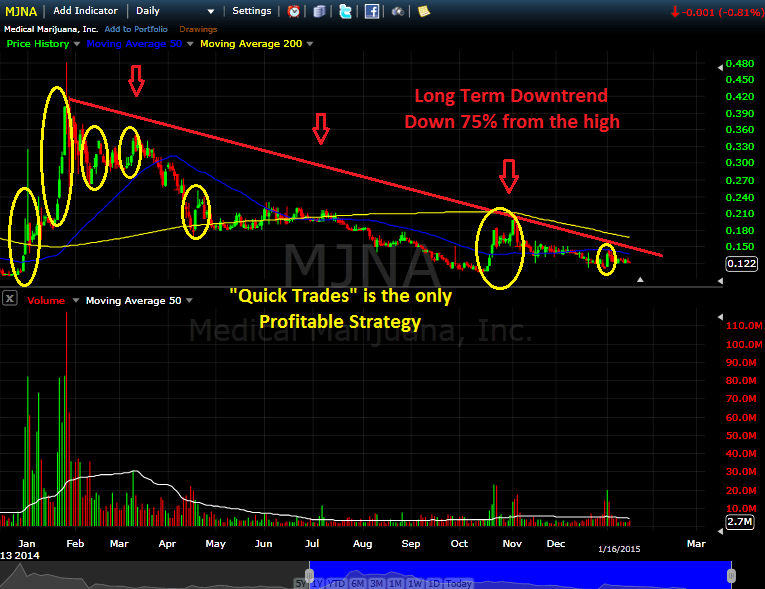 Medical Marijuana, Inc. has experienced a distinct downtrend for the past 12 months with a couple profitable trades mixed in between. Throughout the entire year, there was only one instance where it was safe to hold MJNA for longer than 4 days. 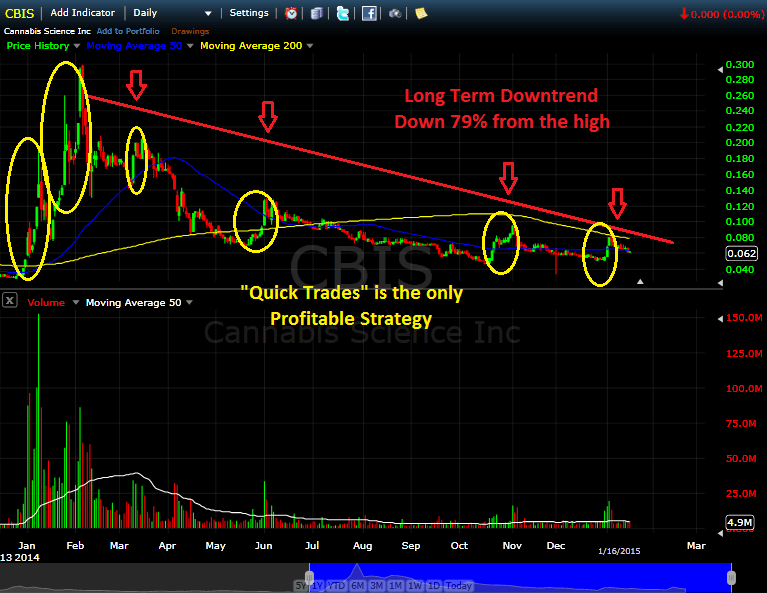 Cannabis Science, too, has been in an overall downtrend for the past 12 months with a few profitable trades throughout.

The list of marijuana companies in a downtrend goes on and on with many charts depicting a very similar picture as the ones above. This even stretches into the vapor industry, another ancillary marijuana sector.

The marijuana industry is growing, but is still in its infancy stage. Similar to what we saw during the Internet Boom, as time progresses I expect to see companies separate themselves from the pack while others fade away into oblivion. Until the outside, uncontrollable risk factors are not as much of a catalyst, marijuana companies will remain nothing more than quick trades for me. But I stress, I am very positive on the future of this industry. I simply think it is still young. As the sector develops, the opportunity for long term buy and hold investments will become clearer.

But as of today, my buy and hold strategy will be in the biotech cannabis space as they are not subject to the regulatory exposure that has proven detrimental to a company’s stock. I will continue to trade the momentum and volatility of marijuana companies because they do provide excellent liquidity and profitable opportunities. But I will likely not hold a position longer than 4-5 days at a time.

2 Pot Stocks To Watch In March