Home Will This Marijuana Stock Continue To Bounce

Will This Marijuana Stock Continue To Bounce

Marijuana stock Aurora Cannabis Inc. (ACB Stock Report) closed last week at the high of the day after its shares rebounded. The company’s shares had lost close to 40% from November 8 to November 18 after the September quarterly results. The quarterly numbers of competitors such as Cronos Group Inc. (CRON Stock Report) and Canopy Growth Corporation (CGC Stock Report) resulted in significant share losses in the first half of November. HEXO Corp (HEXO Stock Report), Cronos and Canopy all saw shares decline 32%, 27%, and 34% respectively in the same period

On Monday of last week, Aurora dropped 16% extending its losses to six sessions. However, the stock rebounded and rallied 40% in three days that followed before dipping by 8% at the end of the week.

However, analysts have mixed opinions regarding the outlook on pot stock to watch Aurora Cannabis. Following the release of the company’s earnings, Pablo Zuanic of Cantor Fitzgerald’s upgraded the company’s stock. He notched it up to “Overweight”. Equally, Pablo increased the price target for Aurora Cannabis stock to $5.85 from $5.1.  According to Pablo, the worst seems to be over for the company even though there are concerns regarding the December Quarter 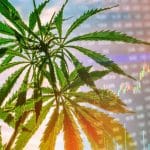 On the other hand, MKM Partners analyst Bill Kirk is cautious about the cannabis giant. He indicated that currently, the cannabis sector is struggling with lower margins and high black-market sales. According to Kirk, it will be challenging for cannabis companies to attain profitability in the near future.

In the last year, there has been a lot of selloff in the cannabis industry and this is reflected in Aurora Cannabis’ stock. The stock dropped significantly from its record highs of $14 and currently, it is trading at almost 70% below the record high. The industry will continue grappling with fundamental issues at least in the near term.

[Read More] Are These Marijuana Stocks On Your Morning Watch List?

The company increased its production in the first quarter of 2020 by 43% even though there are concerns regarding rising inventory. Its consumer cannabis revenue dropped because of changes in customer preferences and distribution challenges. Aurora Cannabis stock could keep the growth momentum shown last week as investor optimism continues to rise.