Home How Big Pharma is To Thank for DEA Marijuana Ruling

How Big Pharma is To Thank for DEA Marijuana Ruling

WASHINGTON — The administration of “Yes We Can” is now the administration of “No We Won’t,” in a ruling that keep marijuana as a schedule 1 drug. No one at Marijuana Stocks is surprised by this ruling from the administration via the lengthy statement from the Drug Enforcement Administration (DEA). Again the Cannabis advocates, activists & patients in need of the properties associated with Medical Marijuana were given some crumbs in true “Hunger Games” Style. As of today’s ruling by the DEA the study of cannabis will be expanded in order to ascertain the potential medical benefits of cannabinoids. Marijuana will continue to be on the list of the most dangerous drugs, regardless of growing support for legalization and more states changing their laws to have some form of medical marijuana or recreational marijuana on the books.

“By punting the reclassification of marijuana debate the DEA exposes themselves to the utter hypocrisy of our classification system. Consider Cocaine and OxyContin are class 2 drugs and are far more ruinous to the people that use and abuse them, yet cannabis which can’t kill you is a class 1 drug which by definition means there are no medical benefits and highly addictive.” Said an agency source under the condition of anonymity.
The Health and Human Services Department was so bold today as to double down on the illogical argument on marijuana by saying cannabis “has a high potential for abuse” and “no accepted medical use.”
A statement of that nature exposes some problems with that argument as well as showing who is potentially to blame for the bureaucracy surrounding these kind of government rulings. Let’s examine this statement and try and draw some conclusions on our own.

First, if marijuana has no medical properties or potential benefits why are BigPharma companies spending hundreds of millions of dollars in research and development to study marijuana and create drugs for patients? Abbvie Inc (ABBV) has had a cannabis related drug it has marketed since 1985 for example called Marinol (Dronabinol Extract) which is an appetite stimulant used by cancer patients. INSYS Therapeutics Inc (INSY) was just given FDA approval for its orally administered drug called Syndros last month which is similar to ABBV’s appetite drug. GW Pharmaceuticals (GWPH) has a drug called Epidiolex for people suffering from seizures, they are also creating their own strains of cannabis for individual targeted Cannabinoids. Any person that has ever used medical marijuana for example knows that one of its side effects is hunger or the “munchies.” Why try and synthesize a drug when nature and thousands of years of use has produced the same result you ask? Money from prescription drugs, money from speculation on the public company creating these drugs and ridiculous ways to capitalize from the insurance that pays for it all. The reality is that cannabis is essentially a weed that grows all over the world and the pharmaceutical industry would lose potentially hundreds of billions of dollars if cannabis was federally legal. Which leads me to point two in exposing the bureaucracy tied to Big Pharma.

So how do the lawmakers in the United States and agencies like the DEA come to these irrational conclusions that lack all common sense? Lobbyists on K Street in DC for starters. Given medical marijuana’s position as a cheaper, safer alternative to pharmaceutical products, pharmaceutical companies stand to lose a significant chunk of market share if marijuana legalization were to pass. BigPhRMA is universally recognized as marijuana’s biggest financial competitor, with drug manufacturers giving a whopping $21.8 million to a myriad of federal candidates and committees, as well as political parties during election times. In 2013 alone, Big Pharma spent approximately $18 million solely on lobbying, according to OpenSecrets. While easily one of the biggest contenders to the marijuana industry, Big Pharma was hit with a crucial turning point, a survey of 473 adult therapeutic cannabis users, conducted by the Centre for Addictions Research of BC, found that 87% of respondents gave up prescription medications, alcohol, or other drugs in favor of cannabis.

Other Lobbies that are fighting relentlessly against cannabis are private prison corporations as well as the alcohol & tobacco industry. For mor info on that here’s an article on the top five lobby’s.

In the end officials need to get elected and no one wants to piss off their donors, grassroots organizations like Norml or the Marijuana Policy Project are fighting a war against opponents that have unlimited resources. Even so the expansion of study does crack the door open for the industry and in our opinion prohibition will eventually end. Once the government and big business set up the infrastructure to capitalize on cannabis they will demand their piece of the pie, which has an estimated black market value of $50,000,000,000 and a legal US market estimated at $6,000,000,000. That might be a scary thought, but there will always be artisanal cannabis for the masses and the best growers in the industry don’t need to become sellouts which is positive to us.
Here is the statement from the DEA today. Share this article, Tweet it, Facebook it, email it to your friends and congressman. Everyone must do their part or the elected officials we put in office will continue to vote against our collective interests. 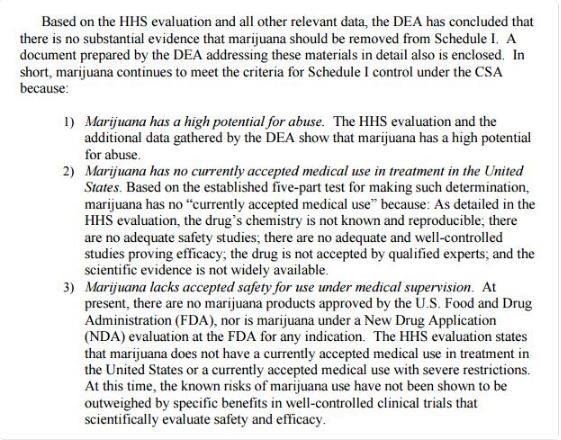