Over the last few years a number of studies have shown that certain compounds found in cannabis have had success killing certain cancer cells and reducing growth in others. A new study has been published in the journal of Molecular Cancer Therapies showing that alongside radiation treatment, cannabis can help dramatically reduce one of the most aggressive types of brain tumors in mice.

A team of researchers from St. George’s University of London found that high-grade glioma masses (a deadly form of brain cancer) were reduced to as low as one tenth the original size when compared to the other tumors in the control group. Dr. Wai Liu, one of the study’s leading authors said, “We’ve shown that cannabinoids could play a role in treating one of the most aggressive cancers in adults. The results are promising…it could provide a way of breaking through glioma and saving more lives.”

What are Cannabinoids? Scientists have identified 85 known cannabinoids in the cannabis plant. The two most recognized are tetrahydrocannabinol (THC) and cannabidiol (CBD), both of which have their benefits when it comes to treating a number of diseases, including cancer.

THC is commonly known as the psychoactive component in cannabis that gets you high. But THC is also good for pain relief, muscle spasms, stimulating appetite, sleeping disorders, and nausea. In fact, Earlier this year Louisiana State University published a study in AIDS Research and Human Retroviruses, which suggested that THC can even stop the spread of HIV.

CBD on the other hand has proven successful in treating epilepsy, anxiety, pain, MS, schizophrenia, and PTSD. The CBD compound is used to treat patients for a variety of illnesses without the psychoactive side-effects like anxiety or paranoia attributed to THC.

The researchers from St. George’s University of London found that CBD and THC are both effective in fighting glioma, and concluded the tumors were best treated with low doses of both THC and CBD, as the tumors were more receptive to radiation treatment. Dr. Wai Liu told the Huffington Post, “Our data suggests a ‘triple threat’ approach using all three may be of value.”

But how exactly do CBD and THC kill cancer cells?

Humans have something called an Endocannabinoid System (ECS) which exists to receive cannabinoids that we naturally produce in the body. There are receptors for these cannabinoids in the brain, in our nervous system, and in cells associated with our immune system. CBD and THC can actually bind with our body’s cannabinoid receptors and essentially tell the cancer cells to ‘commit suicide.’ 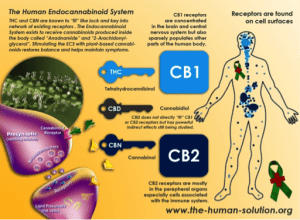 Dr. Prakash Nagarkatti, a professor of Pathology and Microbiology at the University of South Carolina, conducted a similar study in 2011. He created a synthesized cannabis drug that was able to eradicate nearly 100% of the cancer in the test tubes. He then tested the same drug on mice and nearly 30% of the mice completely rejected the tumor, and the rest of the subjects showed significant reductions in size. Dr. Nagarkatti has begun clinical trials on patients with leukemia.

According to the American Cancer Society, in 2014 there will be an estimated 1,665,540 new cancer cases diagnosed and 585,720 cancer deaths in the US. With the information we already have and more research on the horizon, it would be irresponsible to continue to gloss over the fact that cannabis has shown remarkable effectiveness in treating cancer. But cannabis remains classified as a Schedule I drug and the federal government maintains that it has no medicinal value, despite all evidence to the contrary.

If there’s a silver lining though, it’s that 23 states and Washington D.C. disagree, paradoxical as it seems. And then there’s hemp. CBD can also be extracted from cannabis’ sister plant, hemp, which can be legally imported and sold in the US. With more cancer patients having access to the benefits of CBD and THC many of them are incorporating a more holistic approach and are seeing positive results. And not to go too far down the rabbit hole but it does beg the question, why is this medicine not federally legal?

At the very least it should be treated like any other prescription drug that your doctor would write you a script for, much like they do in Canada, eh? Obviously there are many reasons and it’s extremely complex, but for the sake of addressing my question let’s simplify it: follow the money. According to the National Cancer Institute, medical costs for cancer care are $125 billion and are expected to jump to $173 billion in the next 5 years.

And while the marijuana industry is no slouch with a $35 billion projected value by 2020 (assuming all states and the federal government go legal), it’s a drop in the bucket relative to cancer care.

Carter Pewterschmidt and Brian from Family Guy paint the picture:

Brian: “Carter, you’ve discovered the holy grail of modern medicine. Why the hell would you keep it buried like this?”

Carter: “I’ll tell you why, because there’s far more money to be made treating a disease than in curing it. Why cure someone of cancer in a day when we can treat them for a life time and bill them every step along the way?”

The U.S. army, in need of new and qualified soldiers, is reaching…

3 Marijuana Stocks To Watch For Better Trading Next Week

Delaware governor Jack Markell has given his signature to an amendment…