Home How One Marijuana Stock Is Leveraging The Full Scope Of Cannabis 2.0

How One Marijuana Stock Is Leveraging The Full Scope Of Cannabis 2.0

The cannabis industry and marijuana stocks have created countless money-making opportunities over the years. With Canada’s fully legalized recreational market, this industry is about to enter a new phase of growth. But what Canada represents, more than a new market is an opportunity for big institutional money to come into play; the crazy part is that the US is still “the place to be” as we see a number of American companies listing on the Canadian exchanges this year. 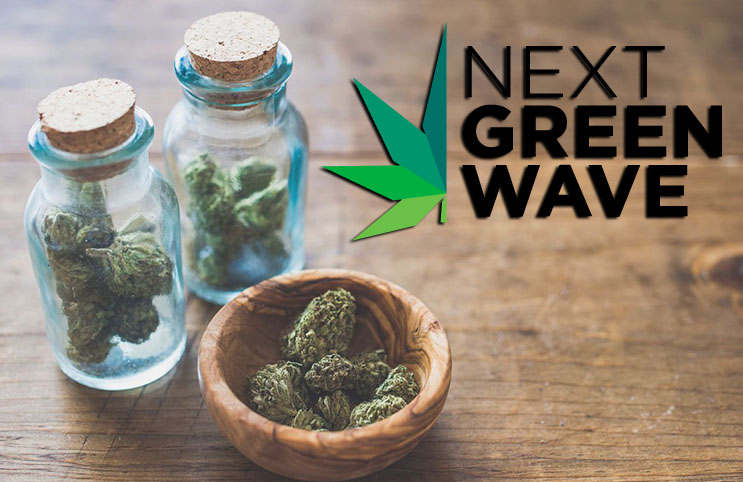 Even today, the United States cannabis market is worth about $8.5 billion, which is already bigger than the Canadian market will be in 2022. In fact, ArcView Market Research and BDS Analytics project that marijuana spending in the United States will reach $23.4 billion by 2022; a 275% increase in just five years. So it makes a lot of sense to be looking at these US-based, Canadian listed companies during these early stages of national recreational legalization.

One of the most anticipated marijuana stock IPO’s this year is Next Green Wave (NGW). One of the hottest markets, which is California, continues to present massive opportunity especially considering its recent move to go legal for medical and recreational cannabis. In fact, California’s passage of Proposition 64 to legalize recreational marijuana is important because of the sheer size of the state.

With the state of California having begun recreational sales on January 1st, 2018, it could be poised to become the largest cannabis market not only in the US but in all of North America.

Aside from the fact that Next Green Wave (NGW) just had its IPO this year on a major Canadian exchange (for now), the company’s business model is designed to be well suited for scaling into the ever-expanding California (and US) cannabis industry.

Next Green Wave (NGW) holds all four Conditional Use Permits in California. These include one of each of the following: cultivation, the operation of a functioning nursery, extraction and distribution of cannabis. Not only does this support a fully optimized business model but it also takes away the usual distribution barriers that some companies in this market face. Furthermore, NGW has both the medical and recreational sides covered.

Like a number of the large market leaders, Next Green Wave (NGW) is taking a strategic approach to the market and ensuring that it can handle a full scale, seed-to-sale business. For example, holding both a nursery and cultivation license gives Next Green Wave (NGW) a unique ability to make full use of every product cultivated, selling not only the flower but also seeds, clones, by-products and concentrates, which ultimately gives the company multiple revenue streams. 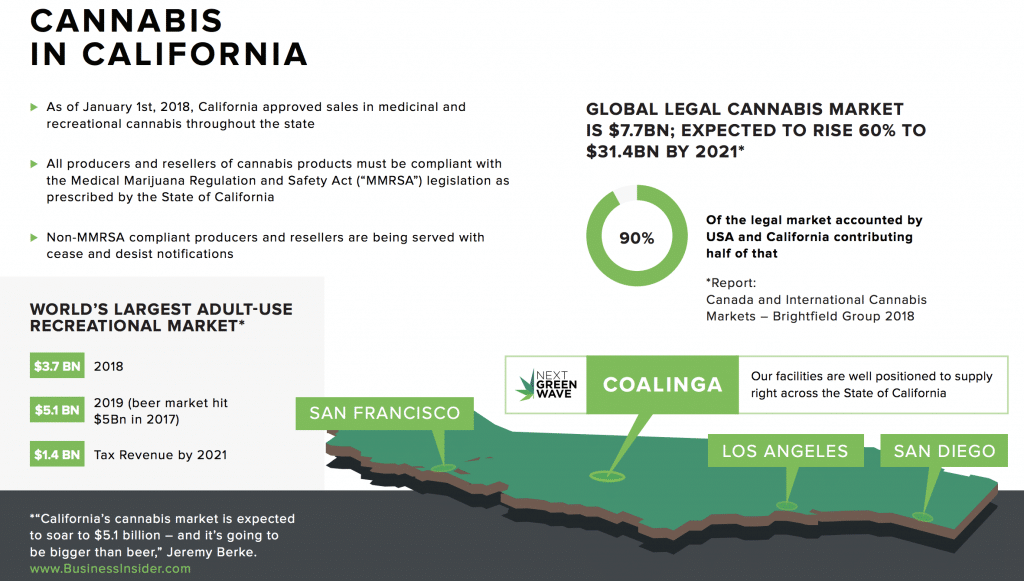 On another side to this model is extraction, which has been holding a bright spotlight recently in the media. Extraction processes allow companies like Next Green Wave (NGW) to produce pure cannabidiol (CBD) and tetrahydrocannabinol (THC). The by-products allow NGW to infuse these into edibles, topicals and other cannabinoid products, which some have identified as major revenue drivers for future growth.

If the “neighbors to the North” can be a gauge, according to Health Canada statistics, sales of cannabis oil in the first three months of 2018 outpaced those of dried flower by 56%. In terms of year-over-year growth for the two forms of cannabis, extracts are easily the winner with a large increase of 82% over the same period in 2017 compared to a 13% in year over year performance for dried flower.

But then you also need to consider that Next Green Wave (NGW) has more. A distribution license rounds out the offering and allows the company to implement targeted brand, marketing, sales, and distribution strategies to sell in-house branded products as well as partners’ branded products.

Also bear in mind that Next Green Wave (NGW) has raised over CAD$21 million dollars prior to its IPO, which it is using to acquire, design and build state-of-the-art production facilities that will fully utilize all 4 Conditional Use Permits. Further, according to the company’s Chairman, Leigh Hughes in his interview in The Australian, it gives them a strong competitive advantage and it reflects Next Green Wave’s B2B business model.

Next Green Wave (NGW) is in the process of building out four planned sites. The first 35,000-sqft facility (Facility A), which is already 85% complete, is expected to be fully operational by the end of this year.

Facility A and Facility B will house indoor nursery and cultivation operations, with a combined capacity of 85,000-sqft. The company has already acquired 3,240-sqft space recently, Facility C, which is being retrofitted to become Next Green Wave’s extraction and research & development facility as well as its distribution hub.

On top of all of this, there’s another 250,000-sqft used for greenhouse space that will be built as Facility D and begin to create a nursery and grow revenue by 2020*. This kind of modern facility provides NGW the ability to grow, breed, extract and distribute a wide array of products that range from premium flower and oil to finished consumer packaged goods.

The 30,000-foot view of Next Green Wave (NGW)’s expansion platform can be summed up below:

The Key To Growth: Market Relationships

Outside of potentially becoming an immediate juggernaut within California’s cannabis market, Next Green Wave (NGW) has also secured key relationships and newly proposed, notable brand acquisitions within the industry as well:

High Times is the global hub for cannabis-related information. High Times anticipates listing on NASDAQ in 2018 and will be a permanent media and events partner with Next Green Wave (NGW).

CGOC’s investment objectives are to provide holders of common shares long-term total return through capital appreciation by investing in an actively managed portfolio of securities of public and private companies operating in, or that derive a portion of their revenue or earnings from, products or services related to the cannabis industry. CGOC has made an investment of CAD$750,000 in Next Green Wave (NGW).

Signed a non-binding LOI with a world-class biotechnology firm, Intrexon (XON), to conduct R&D and assist in the commercialization of Intrexon’s high-throughput plant regeneration technology in the cannabis space.

If these deals weren’t enough, Next Green Wave (NGW) has positioned itself to acquire a premier, award-winning cannabis brand, Loud Seeds through Loud Seeds, LLC.

Loud Seeds is a multiple cannabis cup winner for its seeds & clones and has flourished as innovators in developing premium quality cannabis products to meet the sophisticated palates of cannabis connoisseurs. Over the past 20 years, the principals have developed a vast collection of award-winning strains and have been inducted into the High Times Hall of Fame as well as the Top 40 Seed Banks of all time.

Being covered in the press by The Million Dollar Grow Room, America’s Next Pot Kings and the Top Ten Strains of the Year, the Loud Seeds brand is one of the more recognized seed brands in California. Loud Seeds has breeding methods that have been developed for over 20 years and are specialists in creating, launching and marketing new strains based on consumer demand. And let’s not forget one of the most important aspects of this: Distribution!

Loud Seeds has built a strong distribution list in California along with relationships with many other well-known cultivators and breeding partners. Now, through this proposed acquisition, Next Green Wave (NGW) will have a direct line into the pulse of this dynamic brand & distribution chain.

Another highlight and reason to have Next Green Wave (NGW) on your radar has as much to do with the business as much as it does its leadership team. Next Green Wave (NGW) holds an internationally experienced management team with a focus on consumer-centric solutions and insights lead by six-time Cannabis Cup High Times award winner, Mike Jennings. For investors, insider ownership sits at 45%, which echoes the strong sentiment that the Next Green Wave (NGW) business model emphasizes with respect to growth.

We mentioned the Chairman, Leigh Hughes briefly above, but his reputation precedes him as an innovator. Hughes is an integrated marketing communication professional with more than 15 years of experience, owning his own firm that had clients across global markets. He has been nominated twice for Young Australian of the Year and was a nominee and winner of Western Australia’s 40 under 40 business award in 2012, as recognized by the industry and his peers.

Next Green Wave CEO Mike Jennings is a Californian native from the Central Valley and he has been deeply rooted in the Cannabis industry for more than 20 years. His specialty is in owning and operating dispensaries and cannabis medical offices and he also is the co-founder of Loud Seeds; the same brand we discussed above. With established brands in both the United States and Europe, Mike’s consumer and industry savvy ads a wealth of corporate expertise to the company.

In addition, the company’s co-founder and director, Paul Chow has served as a founding partner, officer, director and corporate consultant to several Canadian public and private businesses during his more than 18-year career in the capital markets. Mr. Chow has a long-standing track record of success in strategic planning, marketing and financing of companies in all stages of growth from startup to IPO.

The Next Big North American Marijuana Stock To Watch?

Next Green Wave (NGW) is building a world-class business and premium brand portfolio in the State of California. The company is fully licensed to produce and distribute cannabis products for both medical and recreational use and already has 15 acres of approved cannabis zoned development land with main Cultivation, Nursery, Extraction, and Distribution facilities in a prime location between San Francisco and Los Angeles.

“You will not find another multi-billion dollar market growing at a 25% compound annual growth rate anywhere in the world that is not already filled with multi-national companies and institutional investors.” – Troy Dayton, CEO ArcView Market Research

6 Things To Watch For Near-Term Potential:

2. Next Green Wave (NGW) has raised over CAD$20 million in pre-IPO financing

3. Construction on Next Green Wave (NGW)’s Facility A is expected to be completed by the end of the year

5. Next Green Wave (NGW) is in the middle of an acquisition that gives them direct access to an already active distribution chain as well as direct access to one of the most notable, multiple cannabis cup winning seed companies.

6. Possibly one of the biggest highlights: Next Green Wave (NGW) is expecting to realize revenue in Q1 of 2019; that’s NEXT QUARTER.

This year marks the dawn of a new era for the cannabis industry and marijuana stocks at large. With the access to capital that the legal market offers for Canadian listed companies along with the opportunity presented by the California market as we know it, Green Wave (NGW) could be perfectly positioned to take full advantage of the next canna-boom in North America.

It is becoming a lot simpler to obtain cannabis, legally. In…

Are These Penny Pot Stocks On Your Watchlist This Week?