The Marijuana for Medical Purposes Regulations (MMPR) and its predecessor the Marijuana Medical Access Regulations (MMAR) were created under the 10-year long reign of the anti-cannabis, former Canadian Prime Minister, and Conservative party member, Steven Harper.

Even after the MMPR replaced the MMAR, the conservatively-influenced program was heavily criticized for stringent requirements and a lengthy approval process for Canadian licensed producers of medicinal marijuana (LPs). Until recently, the MMPR lacked guidance or any regulations of cannabis oil; it does not allow LPs to advertise; and despite the existence of illegal “compassionate cafes” in Vancouver, the MMPR requires that all patients purchase medicine directly from LPs by means of a mail-order system.

The MMAR and newer MMPR, despite its apparent flaws, created a legitimate industry for cannabis companies at a federal level in Canada, thus removing some risk for those investing in companies that cross the “green line” and physically handle the plant in one or more of its various forms verses investing in U.S. cannabis companies that do the same. When compared to the current fragmented state-by-state approach to marijuana here in the United States, Canada’s MMPR already seemed quite liberal. However, with Justin Trudeau’s victory and his pledge to make adult-use cannabis a priority, companies in the cannabis space, worldwide, have reason to celebrate.

In my opinion, it is not unrealistic to believe that Liberal influence could have a significant impact on the rate at which the Canadian public gains social acceptability of choosing cannabis as a medicinal alternative over other treatments such as prescription drugs. I believe that doctors are a catalyst for this sector and, as more doctors feel comfortable discussing cannabis with, and choosing to prescribe cannabis for patients, the end result will be more patients and thus, expansion of the Canadian cannabis market.

The chart below is a quarter-by-quarter comparison of the data points provided on the Heath Canada website.  The consolidated quarterly growth rate for the five quarter set of data given is approximately 25 percent. While it is uncertain how the incorporation of adult-use will affect the patient enrollment rate, it is likely to cause a spike in demand that LPs may not be equipped to handle given current inventory levels. However, it is noted on the Health Canada website that the amount of cannabis being produced is not at the full capacity of the current 26 LPs. The amount of medicinal marijuana produced is controlled by Health Canada. “Production limits help avoid the potential for speculative production (i.e., production that is not based on client demand) that could create a risk to public health and safety, including the risk of marijuana being diverted to an illicit market or use.” 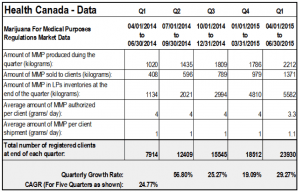 One could assume that if the Liberal party does in fact legalize an adult-use cannabis market in Canada, the production limits would also be controlled, the question is who will control it? One possibility is for production limits to be controlled by the federal government, i.e. Health Canada. The other option would be to regulate recreational adult-use similar to alcohol. The latter would create a duel-system of regulation and fragmentation of various “legal-levels” being left to the providences themselves to decide or a federal limit set and the providences to enforce. Right now, it is still too early for even Trudeau to comment on the structure that needs to be created to handle a recreational cannabis market in Canada, so we must take the “Hilary Clinton” approach and just watch and wait to see what develops.

Another catalyst I believe could accelerate the number of patients in Canada is the addition of cannabis oils and extracts. On July 8, 2015 the Canadian Government announced that LPs would be allowed to produce and sell cannabis oil by obtaining additional licensing. The controversy over cannabis oils in Canada began in 2009 when Owen Smith was arrested and charged with possession of THC with the intent to distribute. He did possess said THC and his intent was in fact to distribute it. Smith was the baker for a cannabis club and it was his job to create edibles for ill patients. He was arrested because the THC was baked into cookies and it was illegal to possess cannabis in a form other than dried flower. After being incarcerated for some time and enduring a very lengthy trial, on June 11, 2015 the British Columbia Court of Appeals ruled that restricting a patient to only accessing cannabis in dried flower form is unconstitutional.

After the ruling, Canadian patients were allowed to possess cannabis in various forms, however, it still did not allow LPs to sell cannabis in any form other than as dried flowers. This meant that creating an oil or making a cannabis extraction was left to the patient. Just as one can argue how insensible it is for a seriously ill patient to grow their own medicine, one can easily see how insensible it is to put the responsibility of extraction on the patient. Many extraction methods are dangerous and it is difficult for a patient to know how strong the extracted product is going to be before they consume it. With LPs the extraction process is safer because it is being done in a laboratory-type environment, not in a person’s home or using substandard equipment. Additionally, LPs are able to have all of the oils tested for potency and other measures, therefore assuring that the patients receive the highest quality medicine directly to their door.

Currently, the Canadian cannabis market has a total of 26 licensed producers of dried cannabis as reported by Health Canada. Twelve out of the 26 also hold licenses to produce cannabis oil and, I believe, that this number will continue to grow. I feel it is likely that more LPs will apply to produce oil due to economic and competitive factors such as the use of leaves and other trim from plants in the production of oils that would otherwise be waste.

Additionally, production and sale of oils gives patients a wider array of consumption methods which could, in turn, increase the number of patients. For many people, smoking or vaporizing dried cannabis flower is not a way that they would choose to ingest medicine, especially in the case of children. And for many, creating their own oils or edible with the proper dose is just too time consuming. Therefore, in my opinion, the new regulation surrounding concentrates and extracts in Canada coupled with potential liberal influence on health care professionals and patients to accept the medical benefits of cannabis will boost growth of new clients over the remainder of year 2015 and into the first half of year 2016.

Finally, current legislation only allows for the sale of cannabis oil, it still does not allow LPs to create products that contain cannabis. It is possible that with the Liberal party now taking office that we could see LPs branding edibles, neutraceuticals, topicals, tinctures, and other cannabis-oil infused products in the near future. While this may not likely produce a spike in patient enrollment, the addition of infused products could be a catalyst of revenue growth for LPs.

Lisa Rowe is an Equity Research Analyst and Financial Writer focused on the cannabis industry. She received a Bachelor of Science in Finance with a minor in Philosophy from John Carroll University and is working toward a Master of Arts in Economics. Ms. Rowe successfully completed the CFA Level 1 Exam and plans to pursue the CFA Designation. She currently serves as the Legal Chair of the Cleveland, Ohio chapter of NORML.

2 Marijuana Stocks To Watch As March Comes To An End

An increasing amount of states are deciding whether to legalize cannabis…