This week has been a roller coaster ride for the marijuana industry. News coming out of Washington D.C pertaining the marijuana reform has been as conflicted as ever. Here is a brief recap of what happened this week.

Congress to block the legalization of recreational marijuana in Washington D.C

Rep. Andy Harris (Republican-Maryland.) introduced a rider into the spending bill aimed at blocking marijuana legalization in Washington, D.C. The language contained in the rider was very ambiguous and hard to understand by even the members of Congress. Mr. Harris says “none of the funds contained in this Act may be used to enact any law, rule, or regulation to legalize or otherwise reduce penalties associated with the possession, use, or distribution of any schedule I substance.” House Appropriations Committee Chairman Hal Rogers (Republican-Kentucky.), said that this spending restriction “prohibits both federal and local funds from being used to implement a referendum legalizing recreational marijuana use in the District.”

Harris stated that the initiative to legalize recreational marijuana will not take effect until it survives congressional review, which does not begin until D.C. Council Chairman Phil Mendelson officially submits the measure to Congress. Then, Congress will have 30 legislative days to pass a joint resolution rejecting the initiative. If Congress fails to pass a resolution during the review period, the initiative takes effect automatically.

On the bright side, the bill that includes the Harris rider, also includes an amendment which prevents the feds from interfering with marijuana reform. This provision was introduced by Rep. Dana Rohrabacher (Republican-California) and it prohibits the Justice Department from spending money to prevent D.C. or the states from “implementing…laws that authorize the use, distribution, possession, or cultivation of medical marijuana.”

In the midst of all of the commotion, the Department of Justice announced a new federal policy. The policy states that American Indian tribes can grow and sell marijuana on reservation lands. Prior to this announcement only four states (Colorado, Washington, Oregon and Alaska) allowed the sale of recreational marijuana. Now, according to this policy, recreational marijuana can be grown and sold in over 20 states.

There are 326 federally recognized American Indian reservations, according to the Bureau of Indian Affairs. Many of these reservations are in states that don’t allow marijuana for medical or recreational use. These states include Oklahoma, Utah, Wyoming, Florida, Wisconsin, Kansas, Nebraska, North Dakota, South Dakota, Idaho, Texas, Louisiana and Mississippi. 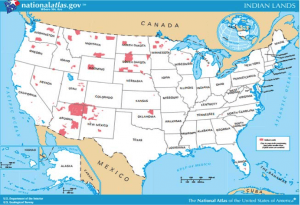 Americans around the country were not happy with the news from Congress and they let their voice be heard. Only a few hours after the rider was introduced, President Obama announced his support of the legalization of recreational marijuana in Washington D.C. However in an effort to avoid a government shutdown he would sign the funding bill that includes a rider blocking the measure.

D.C. voters approved a referendum in November, by a nearly 2-to-1 margin, to legalize the possession of up to 2 ounces of pot or up to three plants for personal use.

So what is going on?

In late October, United States District Judge Kimberly Mueller listened to testimonies during a five day evidentiary hearing aimed at determining if the Schedule I label slapped on the cannabis plant by the Drug Enforcement Administration in 1970 is unconstitutional. Judge Mueller is expected to deliver her verdict in early 2015. Only time will tell if this rider is able to stop the legal marijuana train running through the United States.

Could These Be Winning Marijuana Stocks For Your Long Term Portfolio?

Top Pot Stocks With Dividends In 2023

Is It Time To Buy Canadian Pot Stocks In December?