Home Florida Walks Away With Another Marijuana Victory

Florida Walks Away With Another Marijuana Victory

A Florida judge has waived his gavel in favor of marijuana, saying that the state’s ban on smokable medical marijuana is unconstitutional.

Judge Karen Gievers from Leon County Circuit Court ruled in favor of People United for Medical Marijuana and two other subjects who are in opposition the ban.

Voters passed a constitutional amendment back in 2016 allowing the use of medical marijuana through vaping and in food, oils, sprays, tinctures and other forms of cannabis concentrates. The law ruled this past year included a provision banning it from being smoked, and Gov. Rick Scott signed the measure into law in June.

The plaintiffs argued that because the amendment’s language only mentions smoking in public, users should be allowed to smoke in private.

John Morgan, who led the push to get medical marijuana legalized in Florida, was among the plaintiffs.

He tweeted after the ruling that “truth prevails.” 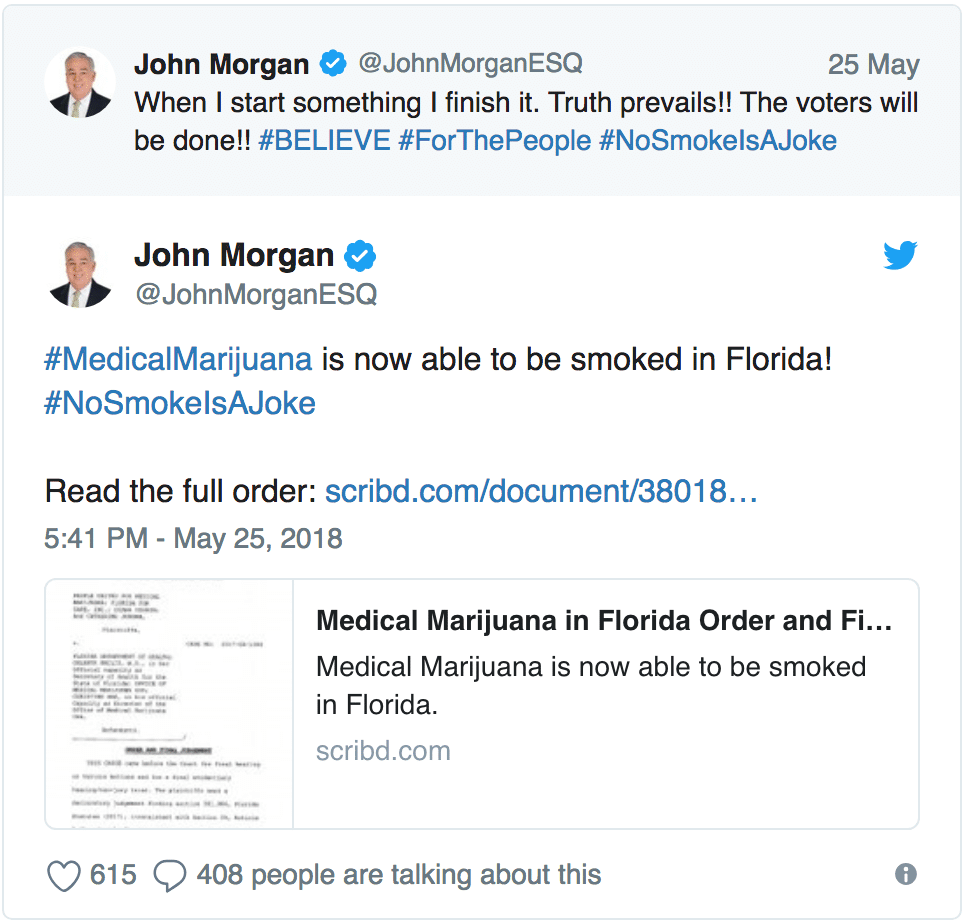 Voters approved a constitutional amendment in 2016 allowing the use of medical cannabis. The only notice of smoking in the amendment’s language and in an intent document during the 2016 campaign was that the law and local governments could prohibit it in public areas.

“I don’t think you need to be too much of a legal scholar to understand it means it is allowed in other places,” said John Morgan, who led the effort to get the constitutional amendment passed.

Jon Mills, who represented the plaintiffs, said in closing discussions that the intent document clearly laid out that private use was not against the law.

“It does allow regulation of amount but not type. Clearly, smokable marijuana is a type of marijuana,” he said.

Deputy Solicitor General Rachel Nordby, representing the state, believed the law was constitutional because the Legislature has a role in policing public health concerns.

“This case is not about what is or what is not marijuana. This case is about is the permissible plain uses of marijuana,” she stated.

One of the women who appeared was Cathy Jordan, who has had ALS since 1986. Jordan told the judge that smoking the plant is the only effective way for her to use it as medicine.

Jordan testified that smoking it dries her excess saliva increases her appetite and works as a muscle relaxer.

“The edibles cause terrible stomach pain and vaping makes me gag,” she said. “Smoking makes my life a lot more bearable.”

Jordan said that when she was diagnosed with ALS — amyotrophic lateral sclerosis — doctors thought she would live only three to five more years.
She credits smoking with helping to prolong her life and has been supported by her physicians.

“Today we saw a woman literally fighting for her life hoping to smoke medical marijuana … ,” Morgan said. “The state of Florida is, in fact, trying to take her life and so many like her. If I was (Attorney General) Pam Bondi and Rick Scott I’d take a look at this video and say enough is enough. Let’s stop the politics and let these people live.”

John Tupps, a spokesman for Gov. Scott, said the state’s Department of Health has been “working nonstop” to implement the law that was passed with an overwhelming bipartisan majority.

“Implementing Amendment 2 has been delayed by the constant litigation filed by special interests,” he said.

Diana Dodson, who was diagnosed with HIV back in 1991, took the stand to say that vaping is 50 percent less effective than smoking and that smoking allows her to get the proper dosage needed.

Gievers’ ruling on the case is not the end of the road. Both sides agree that this is likely the first step in a longer legal battle.

Despite the current market conditions, marijuana stocks have received broad support from…