The MORE Act Is On Its Way Back To The House

Will The MORE Act Makes Its Way Through The House One More Time?

For some time now many cannabis advocates have been fighting for cannabis reform. A topic that was once taboo has now become one of the fastest-growing industries in the world. The cannabis industry has shown the type of progress and success that intrigues people to find a way to get involved. Currently more than half of the United States have legalized marijuana in some form. With the increase in the demand for cannabis, some companies are also seeing a rise in sales.

This increase has led to some cannabis companies having record-breaking revenue. For both yearly and quarterly sales. However even though legal on a state level ending cannabis prohibition is the main objective. With cannabis no longer being an issue on a federal level many ventures can now happen without fear. For instance when the eventual passing does happen U.S. based cannabis companies can now do business in the states with places like Canada.

In fact, some have said that ending cannabis prohibition could be a big asset to Canada’s legal market. As of 2022 more states are soon to vote on legalizing cannabis. Yet as mentioned before the big focus is ending cannabis prohibition. The MORE Act is a bill that’s purpose was to do just that. The Marijuana Opportunity, Reinvestment, and Expungement Act was designed to keep the interest of those in the industry in mind.

Now this bill has unfortunately never made it passed the House. More recently during the last session, the MORE Act was not pushed through. The legislation has measures that would aim for social justice. Such as an expungement program for people with past convictions. Plus the bill would take the tax revenue from cannabis sales and put that money back into various communities. In addition to other programs that promote social justice.

[Read More] 3 Top Marijuana Stocks To Keep On Your Radar

In recent news once again the MORE Act will make its way back into the House of Representatives sometime next week. This now would make 2 times that this proposal has made its way to the House. Other highlights of the bill are it has language that is open to resentencing for people who are in jail for. marijuana. Also, there are other measures that would help immigrants from not being able to get citizenship over marijuana. 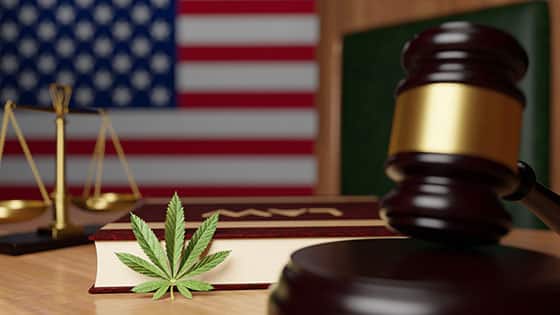 As well, the MORE Act would stop federal agencies from taking away public assistance. With this news, we may start to see a possible bounce in the near future. Over the last year, any progressive news on federal reform has resulted in better trading for marijuana stocks. Many feel if a bill to end prohibition becomes law it may set off a potential run on some marijuana stocks. However, this is not set in stone just speculation of what may occur based on what happened in the past.

[Read More] Cannabis Industry Trends To Watch For In 2022

More Federal Cannabis Reform Bills Are On The Way

Still, as the MORE Act heads back to the House supporters are anticipating good results from Chuck Schumer’s bill. The Senate Majority Leader said he will be filing his bill this April. Following this, a separate bill to tax and regulate marijuana is also in play in this session. These pieces of legislation. make for 2 chances to get the job done and continue to expand on current legislation. All in all 2022 is setting up to be a big year for the cannabis industry as a whole. Hopefully, with the voting of these bills, history will repeat itself, and marijuana stocks will trade better.

United States Senator Sanders, who was recently identified as a “socialist…

For medical marijuana there are many obstacles, however this past week…

Following the legalization of recreational marijuana in four states, there are at…