Overall marijuana sales in Colorado recorded a 10 percent increase during the month of August. Consumers purchased more than $33 million in recreational marijuana, and $32.2 million in medical marijuana. This brings total tax revenue to $45.2 million since January 1 for the state of Colorado.

Many experts say that the increased sales is due to the large amount of marijuana stores opening throughout the state. The month of August also provided the industry with some positive news, marking the first time since legalization in Colorado that recreational marijuana sales eclipsed medical marijuana sales in a given month. Industry experts see this as an extremely positive sign, indicating the retail industry is taking customers away from the illegal black market.

News such as this will only help other states in their campaigns to fully legalize marijuana. It is showing that the “experiment” in Colorado is working. Not only are sales consistently increasing creating more tax revenue, but t more people are choosing to buy their marijuana from a state-approved distributor. 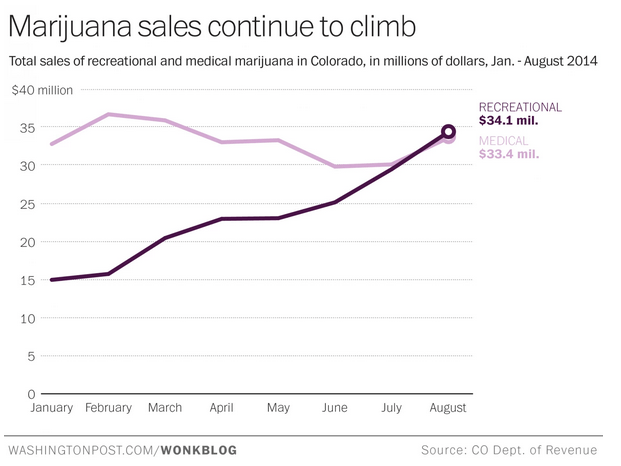 Beer Sales remain unaffected by the legalization of marijuana in Colorado and Washington. Contrary to previous a belief that the legalization of marijuana would damper beer sales, the drug has not proven to be a substitute for beer. Medical marijuana has helped beer sales according to Sanford C. Bernstein analyst; Trevor Stirling says, “The average blue-collar Bud drinker is less likely to be smoking pot. As far as medical marijuana is concerned, it does not appear to be a big threat to the beer industry.” The states that have legalized marijuana in some form have also experienced the highest rates of craft beer production.

This is important news because it shows that beer and marijuana can in fact coexist in an economy where marijuana is legal. Hopefully news such as this will continue to stem from states that have legalized marijuana, possibly slowing the millions of dollars the beer industry spends to keep marijuana illegal.

It is no secret that if you are looking to legalize marijuana,…