Marijuana stocks are seeing a bit of a pullback once again. What investors and shareholders keep watching for is the day when the sector sees a real run. Even though from the end of July and throughout August was the time when the sector had nice upward movement. Particularly since the downtrend occurred back in mid-February. So for those who are looking to get involved with investing in legal cannabis marijuana stocks may be the answer. Right now there are a lot of opportunities to capitalize on. Especially with how low the cannabis sector has fallen. Now is another chance to find top marijuana stocks to buy.

Which many people are doing as the market is showing some good entry levels. Those who do actively buy the dips will take profits along the way. But the real payday will be when cannabis stocks see a run to a level before downtrend or close to it. It seems the strategy being used is a buy-and-hold system. Mainly due to how trading has not been as consistent as it once was. Now what was once a fast pace of buying and selling has turned into a waiting game. Outside of the market, many new developments have happened.

Most places around the world are starting to accept cannabis overall. Inside of the USA, the industry has soared to new heights and growing at a fast pace. The progress and success of the industry are showing more people that it’s ok to be involved with cannabis even if you don’t use it. Around the United States, more places are going legal and creating new markets. With these new markets comes a lot of work and opportunities for people looking to find a way into the industry.

Marijuana Stocks To Watch This Month For Better Trading

Fire & Flower Holdings Corp. through its subsidiary, Fire & Flower Inc., operates as an independent retailer that offers cannabis products and accessories. Which are available through its retail locations located in the provinces of Alberta, Saskatchewan, Manitoba, Ontario, and Yukon. It also engages in the wholesale of regulated cannabis products and accessories in Saskatchewan. As well as operates Hifyre’s digital retail and analytics of regulated cannabis e-commerce platform.

In recent news, the company has announced the expansion of the Circle K Co-location pilot program. The expansion of the pilot program between the strategic partners will see new co-located retail stores open over the next several months. Which will be located in the Canadian provinces of Alberta, Saskatchewan, and Manitoba. The enhanced agreement also allows for the opportunity to further expand the program. This possible expansion into additional high-value markets including Ontario and the United States.

[Read More] 2 Marijuana Stocks To Buy Under 1$ In October? Here’s What You Should Know

“Alimentation Couche-Tard has been an invaluable partner to Fire & Flower as we built out Canada’s largest retail network of legal cannabis products and services over the past two years. Our success in Canada, and now as we enter into the U.S., is directly attributable to the powerful consumer data and analytics technology that we have successfully employed in each of our stores through our Hifyre™ technology platform,” said Trevor Fencott, Chief Executive Officer of Fire & Flower. “As we continue to build on our leadership position, we are leveraging our powerful consumer data, strategically working with our key partners to capture this data and, together, enhance our collective cannabis operations, allowing Fire & Flower to advance our ‘asset-light’ business model to further support our financial growth.”

MedMen Enterprises Inc .together with its subsidiaries operates as a cannabis company in the United States. The company cultivates, produces, distributes, and retails recreational and medicinal cannabis. This process is done under the LuxLyte and MedMen Red brand names. As of September 15, 2021, it operated 23 stores in California, Florida, Nevada, Illinois, and Arizona. 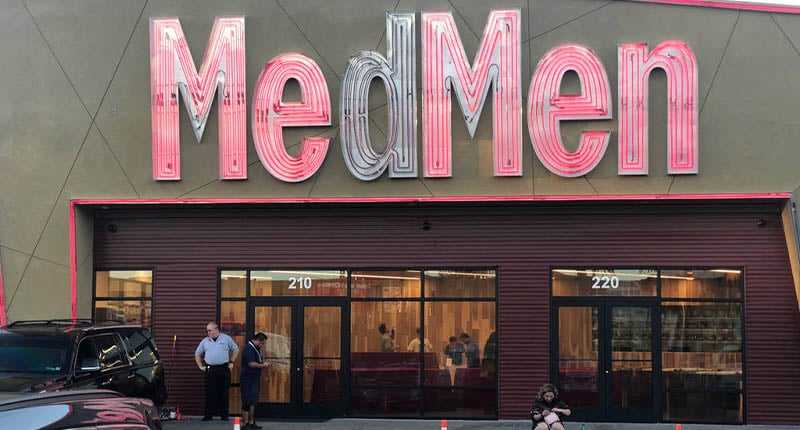 At the beginning of October MedMen announced LitHouse Farms will manage both its California and Nevada cultivation sites. This will be done in conjunction with cash flow accretive foundry works partnership.LitHouse will expand its current California production, enter the Nevada market for the first time. As well as produce flower for MedMen’s private label line MedMen Red.

Words From The CEO Of MedMen

Tom Lynch, Chairman and CEO of MedMen, remarked, “The leaders of LitHouse Farms, Kris and Al Harris, are pioneers in craft mixed‐light cannabis cultivation. We believe they have a skill set that will enable them to capture the best elements of sun‐grown terpenes and mixed‐light energy efficiency and we expect that they will be able to deliver a product with the look and potency of indoor. We and the current employees at our DHS and Sparks facilities are thrilled to partner with true cultivation experts.”

At the start of September MMNFF stock was on a volatile uptrend. Meaning overall trading for the better half of the month MMNFF saw higher recoveries. However, in the last week of September, the company saw a significant loss in momentum. This led MMNFF stock to drop down close to where the company started trading at the start of September. In October this marijuana has furthered its drop in the market. Yet with more in the works outside the market, it’s possible to see this progress resonate well for MMNFF stock.